Owl gets a less than warm welcome from other birds 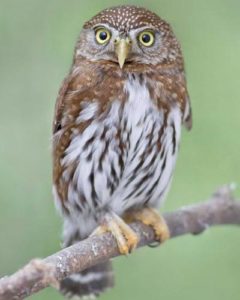 On Monday of last week, I received word that an eastern bird – a chestnut-sided warbler – had been seen earlier in the day at Cave Springs Campground in Oak Creek Canyon. This is the same location where I saw an American dipper just a few weeks earlier.

I was working in Sedona the next day, so after work I headed up the canyon in hopes of finding the warbler. When I arrived, there was a lot of bird activity. There were many dark-eyed juncos feeding down on the ground, and I observed several nuthatches, woodpeckers, hermit thrushes and even a few brown creepers.

While I searched for the warbler, a small owl flew directly over me and landed behind me in a ponderosa pine tree. I whirled around and was able to get my binoculars on it. Almost immediately, a flock of ruby-crowned kinglets began mobbing the owl – they were not happy to have the owl in the vicinity! After several minutes of constant harassment, the owl flew to another tree.

The mobbing behavior only intensified. Now the owl was getting harassed by an acorn woodpecker. The woodpecker was literally dive-bombing the owl, coming so close that at times it appeared as if the woodpecker was actually making contact with the owl. This went on for a few minutes before the owl decided it had had enough and it flew away, out of view.

This impromptu sighting was quite a thrill – a chance encounter with a northern pygmy owl, which is a species I had not seen for several years. Needless to say, this was a new species for my 2014 Arizona list. I never did find the warbler, but I didn’t mind since I saw the owl!

This brief, unexpected experience is yet another example of why birding is so enjoyable. Each time I go out, I never know what I may see. This is the seventh owl species I have seen in Arizona this year. The other six varieties I have seen are barn, great-horned, long-eared, spotted, western screech and burrowing. What a great year it has been for owl sightings!

I have to admit that I have missed a few owl species this year. Last spring, while I was down in Sierra Vista, I looked for a whiskered screech owl in the Huachuca Mountains, but was unsuccessful. Earlier this year, I caught a brief glimpse of a northern saw-whet owl in the dark, but didn’t even get my binoculars on it, so I didn’t count it.

In October, a northern saw-whet owl was discovered at the Community Nature Center here in Prescott. Word spread quickly, and numerous people rushed out to the nature center to see it. But I was out of town that day and missed it! I arrived back in Prescott the next day and headed right over to see if I could find it, but was unsuccessful. I was very disappointed, as a saw-whet owl would have been a life bird for me!

Owls are probably more common than most people realize. Since most owl species are nocturnal, and many of the smaller owls roost in cavities, they are rarely seen in spite of their relative abundance.

If you are fascinated by owls, you don’t have to go very far to see one. Probably the best-known place to see owls in Prescott is the garden center at Lowe’s on Highway 69. For several years now, there has been a pair of great-horned owls that nest and roost in the garden center.