The one that almost got away 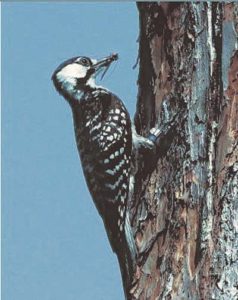 It is not very often that I see a ‘new’ bird that I have never seen before. Having lived in Arizona most of my life, I have seen most of the birds that an active birder is likely to encounter in the state.

Adding new birds to my life list usually involves going to a different part of the country to go bird watching. I had such an opportunity this past week. My wife, Gayla, and I went back to Washington D.C. to visit our son, Jeremy, and his family. We spent time in Maryland, Virginia and in the District of Columbia.

Prior to leaving on the trip, I was dreaming about all of the different birds I might see in the mid-Atlantic region of the United States-certainly a variety of birds not to be found in Arizona. There were two specific bird species that I identified as my ‘target’ birds for the trip-Swainson’s warbler and red-cockaded woodpecker. Seeing both of them would add two new birds to my life list.

Last Friday, I visited the Great Dismal Swamp, (yes, that really is the name of the facility!) a National Wildlife Refuge managed by the U.S. Fish and Wildlife Services Department, in southern Virginia. My target species at this 113,000-acre preserve was the small, ground-dwelling Swainson’s warbler.

The Dismal Swamp was going to be my best chance to see this species-but I absolutely struck out. The bird activity in the swamp was actually rather dismal. Time of year factored heavily into my lack of success. Most migratory song birds had already headed south. If I had been there in April or May, it would have been a much different story.

Since I had no luck finding the warbler, I shifted my focus to the woodpecker. A Park Ranger directed me to a place called Piney Grove, about an hour away. The property is managed by the Nature Conservancy, and it is one of the only places in the whole state of Virginia where this species can be seen.

After arriving at Piney Grove, I searched for hours-unsuccessfully. I ran out of water, I had no food, and time was becoming a factor as I still had a three-hour drive back to Washington, D.C. I finally threw in the towel and headed to the nearest town to get some sustenance.

With a full belly, I was filled with optimism and a commitment to persevere, so I drove back to Piney Grove and resumed searching. Again, I was met with a silent pine forest-in general, it was hard to rustle up anything. I knew red-cockaded woodpeckers were there, as I found over 30 nest sites, but not a single bird. I was frustrated and discouraged.

It wasn’t until after 4:30 p.m. when I started hearing the faint tapping sounds of a woodpecker working on the bark on the trunk of a tree to expose insects. I flushed up a couple of northern flickers, saw several pileated woodpeckers, redheaded woodpeckers, a downy woodpecker and two species of nuthatches.

Finally, I saw one, then two, then three red-cockaded woodpeckers-I had discovered a family group! Success! I was so happy to find the birds, as I had searched unsuccessfully for so many hours, enduring both high temperatures and high humidity. My clothes were soaking wet, and I was bitten up by bugs, but I got my bird! The drive back to D.C. was a lot happier with a new bird of my life list.