Being observant leads to the discovery of several bird nests 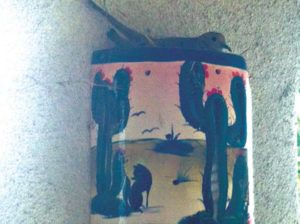 I am down in Wickenburg this week leading the first of two weeklong Road Scholar birding trips for Northern Arizona University. So far this week, we have birded primarily in riparian areas bordering Sonoran Desert habitat.

The first nest I saw was pointed out to me by the desk clerk at the hotel where our group is staying. A mourning dove has built its nest directly over an exterior light fixture in a covered walkway. In spite of the heavy foot traffic, the dove is content to sit on her nest and seems unperturbed by all of the comings and goings here at the hotel.

As I conducted an orientation meeting the night before our bird watching started, one of the questions I asked each of the participants was whether there was a “target” bird they were hoping to see on this weeklong birding adventure. One gal said, “No, I don’t have a specific type of bird that I would like to see, but I would like to see a hummingbird’s nest.”

Well, she didn’t have to wait long to have her wish fulfilled. On our first day in the field, we discovered an active Anna’s hummingbird nest in a palo verde tree. The nest was only about seven feet off the ground, so we were able to get good looks at it.

Some of the bird nests we have discovered include say’s phoebe’s, a curve-billed thrasher’s, several cactus wren’s, numerous verdin’s and several great blue heron’s nests.

One of the more interesting locations for a nest was that of a Canyon Wren. We couldn’t actually see the nest, but we knew that it was there because every few minutes we watched an adult with a mouthful of food fly in and out of the same exact spot.

We were at Burro Creek Campground where we watched canyon wrens as they flew up into the under carriage of an RV parked in the campground. I have no idea how long the RV has been parked there, and I don’t know when the owners of the RV are planning to leave. I do hope the baby birds will have an opportunity to fledge first, or they are going to end up far from home as the RV had a Canada license plate.

Another interesting sight was the observation of birds using nests made by a species other than themselves. On the underside of a bridge spanning Burro Creek, there are rows of mud nests built by cliff swallows. Some of the birds that are taking advantage of these nesting cavities are several house sparrows. It is a funny sight to see a male house sparrow poking his head out of a swallow’s nest!

Another interesting observation -and it was a chance sighting – was watching a canyon wren using a cliff swallow’s nest on the face of sheer canyon walls high above the river. I can honestly say that I have never seen this behavior before. Using my binoculars, I observed a canyon wren going in and out of a mud nest built by cliff swallows.

It pays to be observant when spending time in nature, as you never know what you might see. Until next week, Happy Birding!