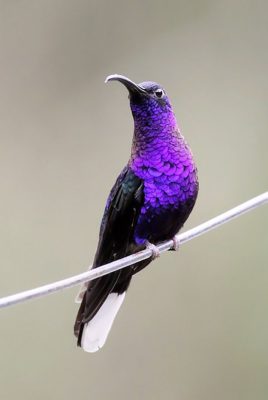 This is part three in a series.

Leaving the central, high-elevation volcanic region of Costa Rica, we headed east over the Continental Divide and entered the Caribbean lowland habitat.  We were shivering just the day before, and now we were sweltering in the heat and humidity of the lowland tropical forest.

Our destination was the La Selva Biological Station, an organization dedicated to tropical studies. For the past 50 years, hundreds of faculty members and thousands of students have come to La Selva to study the flora and fauna of the tropics.

The property for La Selva is home to 2,077 species of plants, including 420 species of trees and 140 species of orchids.  Additionally, 469 different bird species and more than 500 species of ants have been identified on the property.

At one point, while staying at La Selva, I took a picture of the weather station showing the relative humidity as 97 percent!  As a group, we did early morning and late afternoon bird walks to take advantage of cooler temperatures.  However, when the group took a break to avoid the heat of midday, I headed out on my own in search of birds. I didn’t care how hot or humid it was — I was bound and determined to find new birds.

Because we were in a new habitat, we added new bird species to our trip list, such as great green macaws, toucans, trogons, motmots and parrots.  I have to say, I was really taken by the macaws.  Watching them in flight was almost magical.  It was as though they flew in exact unison, almost like synchronized swimming, but in flight.  It was at Le Selva that we also saw bat falcons for the first time on our trip.

One element of our trip that I really appreciated was having local guides join our group.  Their familiarity with the area was a bonus and resulted in finding birds, sloths, and other creatures that we might have otherwise missed.

After spending two days in the Caribbean lowlands, we moved farther inland to an area best described as mid-slope — a transition zone between the higher rain forest and the lowlands. Again, making a slight change in habitat resulted in new varieties of bird species to be seen. The mid-slope elevation was filled with rivers draining the water from the higher elevations.  There seemed to be water everywhere!  We used suspension bridges to cross many of the rivers. It was tricky trying to use optics on a swaying bridge; it really didn’t work very well.

The most impressive birds encountered in this habitat were the hummingbirds. Costa Rica is home to more than 50 different hummingbird species!  At Toro Amarillo waterfall, we visited a facility that provides hummingbird feeders. Wow, talk about action!

On many occasions, the hummingbirds would whiz past us so closely and so fast, we couldn’t help but feel the need to try and dodge them — which is really silly when you think about it. By the time our brains registered that a hummingbird was flying past us, before we could even move out of basic instinct, the hummingbird had already gone by.

Like our hummingbirds here in North America, the ones in Costa Rica are not lovers — they are definitely fighters. It was a constant scene of bickering, fighting, and chasing one another continually — even though there were many feeders and more than enough nectar for all of them.

For the trip I saw 29 hummingbird species.  The species that impressed me the most was the violet sabrewing — a large and beautifully colored hummingbird.