As nesting winds down, birds are on the move 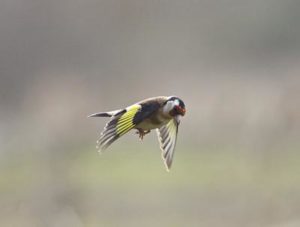 Many of the bird species that summer and breed in the Central Highlands area of Arizona are finishing up their parental duties as their fledglings leave the nest and begin to strike out on their own.

The ravens that nest each year in a large ponderosa pine tree in our yard were successful in raising another rambunctious, raucous group of fledglings. It seemed like it took longer than normal this year for the fledglings to leave the nest – but when they did, I think everyone in the neighborhood surely knew it.

Interestingly, just two houses down from where we live, a pair of Cooper’s hawks raised their brood in a cottonwood tree. Between the Cooper’s hawks and the ravens, there hasn’t been much peace and quiet in our neck of the woods.

Ravens and hawks are mortal enemies and greatly despise the presence of one another. For months I have been watching their aerial battles in our cul-de-sac. There typically is never a winner or a loser as they engage in their brief aerial spats, and it sure is fun to watch.

With the fledgling ravens and hawks out of their nests it has been even more combative. One day I witnessed a young raven, only a few days out of the nest, get attacked in mid-air by an adult Cooper’s hawk. This drew the ire of one of the adult ravens, which swooped in and drove off the hawk. Never a dull – or quiet – moment.

As fledglings leave the nest, it is not uncommon for both the parents and the young to disperse and spread out a little bit. I have noticed over the last week a sudden surge in mountain chickadee activity in and around our yard. Prior to this week I hadn’t seen any chickadees for months. I assume they are done rearing their young and have now moved back into our area in search of food.

Another new arrival this past weekend was a lone rufous hummingbird. You know what that means – it is time to put up more hummingbird feeders.

I have had four hummingbird feeders up for about two months but I will soon increase that number to eight. From now until the end of August hummingbird numbers will increase weekly as more migrants move south, and as fledglings join their parents at feeders.

Based on the amount of nyjer/thistle seed we are selling it appears lesser goldfinch numbers are up dramatically this year over last summer when most backyard bird feeders were lacking finches.

It will be interesting to see what changes the summer monsoon rains will bring in the way of bird activity. The rainy season can make bird feeding a bit challenging. Birdseed can get water-soaked which can make it get moldy and unsafe for consumption. Birdseed can also germinate in feeders if the seed gets wet. This time of year, it is critical to keep your feeders clean so the birds stay healthy. One suggestion is to not fill your seed feeders as full if there is a possibility of the seed getting wet.