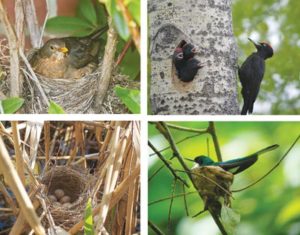 If you haven’t seen any baby quail yet, don’t despair: There are several months of breeding season ahead. Each year we get reports of tiny baby quail, freshly hatched out of the egg, in the months of May, June, July, and even into August.

Breeding and rearing young for larger species – such as great-horned owls, red-tailed hawks and common ravens – is typically a one-shot deal. If they experience a nest failure due to predation, weather or some man-caused event, they are done for the year. Any attempts at breeding are put on hold until the following year.

However, it is not uncommon for small songbirds – such as mourning doves and house finches – to have several broods in one nesting season. Interestingly, bird species that are year-round residents typically breed both earlier in the spring and later in the fall. This makes sense, as they are physically present and can set up house-keeping early and keep the home fire burning later in the year.

In the Prescott area, there is a very interesting bird species called a phainopepla – some folks call it a black cardinal. Males are jet black, and females are dull grey overall. Both males and females have white wing patches, which are visible in flight. Another diagnostic characteristic of this species is their ragged crest.

Phainopeplas are migratory, but they don’t go very far in terms of north to south and back again. Their migration can almost be described as being more elevational in nature – going down in elevation in winter and moving back up to higher elevations in summer. When it comes to breeding behavior, phainopeplas are a unique species.

What they do next is really fascinating. After getting situated in their summer range, they breed again and raise young at their summer residence. This is very unusual behavior in the bird world – to rear young in two different habitats, one before and one after migrating – and is not common at all among songbirds.

What should you do if you come across a nest or some baby birds out of the nest? It is my opinion that the best thing you can do is to leave them alone! I think any time we interfere with Mother Nature, we tend to mess things up. Nature is resilient and does a good job of taking care of itself. Custodial interference is never a good thing in the natural world.