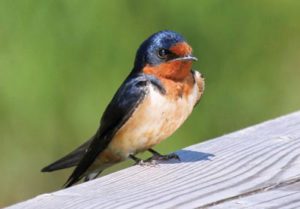 Earlier this week I was invited to speak at a HOA meeting for one of the communities in Prescott Lakes. I was asked to specifically address the issue of barn and cliff swallows that have a propensity for building their mud nests on homes near the golf course.

These two swallow species are an example of how adaptable birds are to changes in habitat based on human activity. Before the Prescott Lakes community was built, there were no barn or cliff swallows nesting in this part of Prescott. These species depend on human structures such as buildings, bridges and box culverts to build their nests. The original, native habitat in this area was a mixture of cliff rose with a smattering of juniper and pinyon pine. In its natural state, this area was unsuitable for swallow nesting.

The process of developing some of the amenities that Prescott Lakes offers – the creation of artificial ponds and irrigated golf courses – created the perfect habitat for swallows. Not only were prospective homeowners and golfers attracted to the development, but so were the swallows!

Swallows are an example of a bird species that is incredibly beneficial to man. They are “aerial gleaners,” meaning they catch insects on the wing, at a rate of about 60 insects per hour. Over the course of a day, one bird catches about 850 insects – consider it natural pest control!

You might wonder why you wouldn’t want swallows around your house. The downside is the mess swallows make on houses, patios, decks and entryways. Between their mud nests and the bird poop, it can be extremely messy.

The purpose of my presentation was to advise homeowners on what they can and cannot do to discourage swallows from building their nests on their homes. Part of the discussion focused on the federal protection of migratory birds. All migratory birds are protected by the Migratory Bird Treaty Act of 1918. It is a violation of federal law to tamper with or destroy birds, their nests or their eggs. Exemptions in the act are non-native invasive species such as pigeons, starlings and house sparrows.

It is not illegal to discourage nesting activity in areas where you don’t want birds to build their nests as long as these preventative measures are taken before the nest-building process begins. However, if the birds beat you to the punch and build a nest, you have to leave it until nesting season is over. Once migratory birds have left, it is not illegal to remove their nests.

On another note, the stormy weather we have had over the past few days has been amazing! We received over two inches of precipitation at our home between Sunday and Monday. On Monday, I went out to check on the creeks and was amazed at the volume of water racing toward Watson and Willow lakes. Watson Lake is completely full, and I suspect Willow Lake will be full within the week. It has been years since Willow has been full, so this is very exciting to those who enjoy kayaking, canoeing, fishing and birdwatching.

With all of the rain we’ve had, I have stayed off the trails because of the mud. In order to get my “hiking” in, I went to the Prescott High School track. Tuesday night, during the course of my walk, I saw common ravens, a Cooper’s hawk, Say’s phoebe, western bluebirds and house finches. It is amazing how many birds can be observed in an urban setting. I am grateful to live in such an amazing area with an abundance of birds.