Nesting activity is in full swing down in the desert 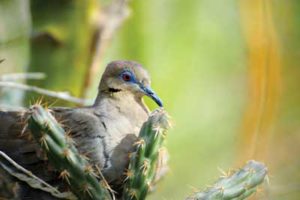 I am down in Wickenburg again this week leading another Road Scholar birding trip for Northern Arizona University. There is so much I could write about but I will focus today’s column on all of the bird nests we have been discovering.

Here at the hotel, there is a mourning dove nest with two young. Just today I saw one of the juveniles out of the nest for the first time.

Last Monday when we were birding at Date Creek, one of the participants discovered a female vermilion flycatcher sitting on her nest. The nest was camouflaged extremely well on a low branch in a mesquite tree. With the naked eye it was difficult to even see where the nest was, but with a spotting scope we were able to get great looks at the nest.

On Tuesday of last week, we were at Burro Creek and saw great-blue herons nesting on south-facing cliffs high above the river. It is so fascinating to see herons-which normally nest in trees-nesting on the side of a virtually sheer canyon wall.

From our vantage point, we could not see into the nests. However, based on the behavior of the adults, I am sure there were either eggs or fledglings in the nests, as the herons were providing shade-acting like an umbrella to keep the sun off the nest.

It is interesting to think what it must be like for heron fledglings when they make their first solo flight. It would be fascinating to witness a young heron leaving the safety of its nest for the first time, hopefully descending safely to the bottom of the canyon floor, which must be at least one hundred feet below the nest.

Later in the day, as we returned to Wickenburg, we did a little birding detour and discovered a red-tailed hawk nest in an old-growth cottonwood tree. The nest was located in an area of the tree where it was fairly open and exposed to sunlight. Like the herons, the hawk was sitting on the edge of the nest providing shade for the occupants of the nest.

On Wednesday, while birding at the Hassayampa River Preserve in Wickenburg, we discovered a female black-chinned hummingbird working on her nest. The nest looked done, but she was applying finishing touches-coming and going with additional material that she was working into the nest. We were using a 30-power spotting scope at a distance of only twenty feet so we were able to see the nest and the hummingbird really well. We also discovered a lesser-goldfinch nest and two song sparrow’s nests at the preserve.

On Friday, while birding in Yarnell, we discovered the nest of a pair of zone-tailed hawks. At one point, we watched the male bring a lizard to its mate as a token of courtship, at which point they mated briefly.

Later in the day, we discovered a great-horned owl nest in Peeples Valley, and on Friday, we found a second great-horned owl nest, this time in Congress. Using a scope, we could see that there were fluffy, down-covered juveniles in the nest! While birding in Congress, we also watched a pair of gilded flickers that were going in and out of a nesting cavity located in a large saguaro cactus.

The temperatures this week have been in the 90s, but the birding has been very good during the morning hours. It has been a real treat to discover so many active nest sites while bird watching.