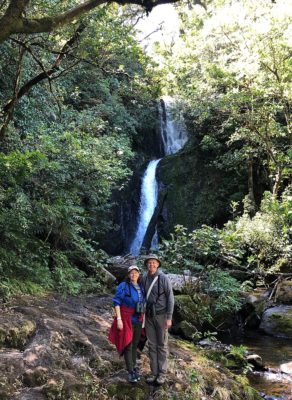 Our last few days in Costa Rica involved more travel time and less birding. At this stage in the trip, it was getting harder to add new species to my trip list, but that doesn’t mean I slowed down my efforts!

One day we birded at an amazing lodge and spa, El Silencio. Nestled at a mid-slope elevation, the habitat could be considered tropical rain forest. There was water everywhere. Our hike from the lodge took us further into the forest, eventually ending at an impressive waterfall.

New birds observed included torrent flycatcher, tufted flycatcher, smoky-brown woodpecker and a pair of American dippers. One highlight was an active, purple-throated mountain-gem (a type of hummingbird) nest, with two babies. Surprisingly, the nest was built in a very open, exposed area—only about four feet off the ground.

Our last destination before returning to San Jose, Costa Rica, was Casa Chayote Lodge. We didn’t bird there too much, as we left early each morning and came back late each afternoon. However, the views from this location—especially at night—were beautiful, overlooking the central valley.

On our last day we returned to our starting point—Hotel Bougainvillea in Heredia. Arriving early afternoon, I had about four hours of daylight to squeeze in my last bit of Costa Rican birding on this trip. My efforts were rewarded with three additional species for my trip list: white-tailed kite, Vaux’s swift and Philadelphia vireo.

I have finished inputting all of my bird sightings into eBird, and my final count for the trip was 316 species. Adding this to the number of birds I have observed in the United States brings me to a total of 470 species this year!

Returning to ‘real life,’ I have settled back into my daily routine, which includes walking on the track at Prescott High School. I have been impressed by the variety of birds I see at the high school, in the middle of an urban environment. During my walks along the track in the past week, I have seen rock wren, western bluebirds, American robins, white-crowned sparrows, American pipit, Cooper’s hawk, house finches, and of course ravens—lots of ravens.

One of the things I like about bird watching is that I can engage in my hobby everywhere I am. While I loved birding in Costa Rica, I can see beautiful birds while exercising right in town in Prescott.

This past Saturday, I had a real surprise as I was bike riding the Willow Lake trail. It was a sunny day, but the air temperature was cool, and it was very windy. Imagine my surprise as I spotted a small snake, stretched out in the middle of the trail. I narrowly missed it! Slamming on my brakes, I slid to a stop, jumped off my bike and ran back to where it was in the trail.

It was a species of snake called a groundsnake—very small, maybe 12 inches long, but smaller than the diameter of a pencil. It was taking advantage of the warmth of the sun, but it was in a precarious spot, so I caught it and moved it off the trail. I pulled out my phone and checked the weather app for Prescott, and it showed the temperature was 54 degrees.

In spite of lingering patches of snow in shady areas, it certainly is starting to feel very spring-like here. This week, I put out a third hummingbird feeder. I don’t have that many feeders out this early in the year, but, since there has been so much hummingbird activity, I thought it would be wise to put out another feeder.

Eric Moore is the owner of Jay’s Bird Barn, with three locations in northern Arizona – Prescott, Sedona and Flagstaff. Eric has been an avid birder for more than 50 years. Email your questions about wild birds to eric@jaysbirdbarn.com.