Moore: Getting out and enjoying nature in our ‘backyard’ 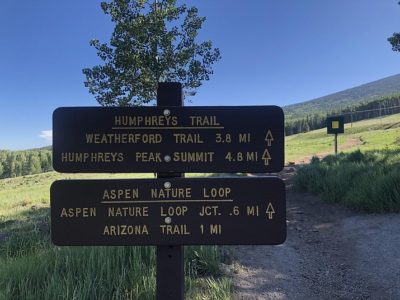 Several years ago, I heard the following story, which I will attempt to retell in my own words.  Back in the 50s or 60s, a young man worked as a service station attendant in southern Utah.  One day, he was refueling a car with a New York license plate.

The young man replied, “No, but I have been to the Statue of Liberty,” to which the man from New York City replied, “I’ve never been there.” There is a lot of irony in this story. I feel all of us experience this irony in our own lives.

For example, I’ve been to Africa, South America and Central America, but I haven’t been to a lot of places right here in the United States, such as the Redwoods, Yosemite, or Glacier.  I visited Yellowstone for the first time just four years ago.

Recently, I’ve been thinking how I drive every week to Flagstaff to work at the Jay’s Bird Barn store there, and yet I really spend very little time in the Flagstaff area enjoying nature. Most days it’s the mad dash—I get up super early, drive to Flagstaff, work all day, then drive home. The question is, why don’t I take in the beauty of the area and spend some time in nature in this incredibly beautiful part of our state?

Interestingly, I still have my handwritten records of my first experience birding in the Flagstaff area. It was June of 1973, when I was just 13 years old. I was a Boy Scout, and my dad and I went with my Scoutmaster to meet a Boy Scout troop from Minnesota, to hike the Grand Canyon together.

I was living in Tucson at the time, and we drove to northern Arizona and visited Sedona, Jerome, Williams, Flagstaff, Sunset Crater and, of course, the Grand Canyon. In my notes, I record my first observation of violet-green swallow, western and hepatic tanagers, Steller’s jay, common nighthawk, white-breasted nuthatch, western bluebird, rufous-sided towhee (now known as a spotted towhee) and common crow.

Last week, I decided to not just do the ‘mad dash’ to Flagstaff and back. Instead, I camped out on the Peaks and did a little birdwatching.  After work, I drove up Snow Bowl road, camped off of Forest Road 522, and birded the next morning at Lamar Haines Memorial Wildlife Area. I spent time bird watching as I hiked a portion of the Humphrey’s Trail. I didn’t hike far, as I was concentrating my efforts on bird watching, but I got up over 10,000 feet in elevation.  I had to wonder, why don’t I do things like this more often?

So, if you are like me, and you tend to travel to far-off destinations but don’t visit some of the more beautiful places in the great state of Arizona that are virtually in our backyard, I invite you to discover the wonder, the beauty and the diversity of Arizona. We live in an amazing place!  There is a whole world out there waiting to be explored.

Oh, and by the way, I saw some great birds, such as American three-toed woodpecker, Williamson sapsucker, red crossbills, red-faced warbler, northern goshawk, Swainson’s thrush, and many more.