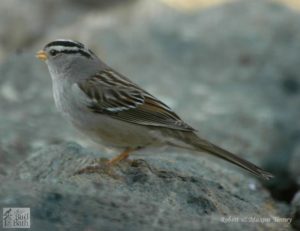 Did you know that May is International Migratory Bird Month? Over the next few weeks, millions and millions of birds will be on the move as they fly from their winter range to their summer range. In the process of migrating, many of these species pass through the Central Highlands area of Arizona on their way north.

A lot of backyard birders keep a record each year of the birds they see in their yard. Recording the date when migrating birds arrive – or when our wintering visitors leave – is an enjoyable part of the bird-feeding hobby. It is interesting to compare records from year to year and see how predictable migrating birds are. Oftentimes species will show up on the exact same date each year.

If you don’t keep a record of the comings and goings of the birds in your yard, you might have those occasional ‘a-ha’ moments when one day you suddenly realize, “Gee, I haven’t seen any dark-eyed juncos for a while.” Yep, they’re gone already. Most of the white-crowned sparrows are gone too, as are the ruby-crowned kinglets and the yellow-rumped Warblers.

It is fascinating to me to witness the ebb and flow of birds in my yard as they come and go throughout the year. Just this past weekend I had two female Cassin’s finches in my yard taking full advantage of the black-oil sunflower seeds in a tray feeder. I was pleased to see them as I hadn’t yet seen any Cassin’s finches this year. This is an example of why I keep checking the feeders each time I walk by the window – I never know what might just show up.

While most birds migrate following specific flyways to get where they are going, there are always exceptions to the rule, such as when a bird is lost and is totally off course and out of its normal range. Every so often a really rare bird shows up in the Prescott area – so rare in fact that it is considered an “accidental” species, meaning in the last 30-plus years there have been five or fewer sightings of this species.

An example of an accidental species is the black-throated blue warbler. Its normal range is on the other side of the country. These birds summer in northeastern United States and Canada and winter in the West Indies. A male black-throated blue warbler was discovered in 2009 in the Granite Dells area east of Highway 89. I am sure it was in the process of migrating – it just took a left when it should have taken a right!

Each spring as migration kicks into high gear, we get reports of unusual bird sightings in the Prescott area. Recently there have been both evening grosbeaks and red crossbills in the area. I also know of a couple that has a lone Lewis’ woodpecker coming to their feeders.

This week, right here at the Bird Barn on Willow Creek Road, I have seen on more than one occasion Swainson’s hawks flying over. Swainson’s hawks are moving from their winter range in Argentina to their summer range here in North America. I encourage you to diligently check out the birds in your feeding areas as you might see some unusual birds over the next few weeks.