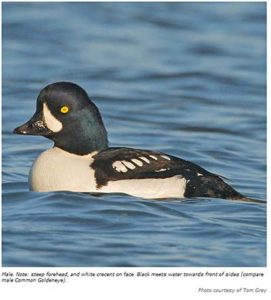 This past week our family gathered for Thanksgiving in Logan, Utah, in beautiful Cache Valley. Needless to say, I went prepared to do some bird watching!

Before birding, I got on eBird to see what species had been reported recently in that area. One sighting that caught my eye was a report of Barrow’s goldeneyes-a type of duck-at a place called First Dam.

The weather was downright frigid and the wind was brutal. Using a wind chill factor chart, I calculated that when we were outside it felt like five degrees below zero! Somehow I managed to convince my son, Merritt, to go birding with me. Layered and bundled, we ventured out first thing Thanksgiving morning.

Our birding consisted of driving to several different locations, getting out of the car briefly to bird and then quickly getting back in the car and cranking up the heater. When I was outside, I found it hard to even breathe as the wind was blowing so hard.

Our first stop was at First Dam, right at the mouth of Logan Canyon. We were rewarded with great looks at both common and Barrow’s goldeneyes, oftentimes swimming side by side. This provided us with an excellent opportunity to do a compare and contrast of the coloration and markings of the two species.

From there we went out to some agricultural and wetlands areas. I had a list of target birds in my mind that I was hoping we might find, such as northern shrike, snow bunting, or perhaps some game birds such as pheasants, grouse and partridge.

In spite of the temperature and a blanket of snow and ice covering everything, we persisted in our efforts to find birds. We saw a Bald Eagle, northern harriers, several kestrels, gulls, ducks, and even some American Pelicans, which surprised me as I thought they would have already migrated.

In the end, we never did discover any of our target birds. However, we enjoyed time together and time in nature. After dropping Merritt off at his home, I went back out on my own. I visited a cemetery and then went to the campus of Utah State University where there were mature trees that I thought might be a haven for birds.

It was interesting to see that all of the trees in the cemetery were growing at an angle-an indication that these trees are subject to high winds most of the year. I did not see a single bird in the cemetery. The only animals I saw were two deer and one squirrel! The birds were much smarter than I and were hunkered down.

My time on the USU campus was more productive. I found an area that was slightly protected from the wind, and in the process, I found several bird species including northern flicker, red-breasted nuthatch, mountain chickadee, American crow, American robin and cedar waxwings. One of the species I was specifically looking for was Bohemian waxwings, but I didn’t see any.

In this environment of extreme cold, snow and wind, it was interesting to reflect upon the topic of bird migration. I couldn’t help but wonder why birds were even there. Why didn’t they go further south? However, going south is relative to where you summer. Many of the birds that winter in northern Utah migrate hundreds-if not thousands-of miles from their summer range in Canada and Alaska.

Bird species that winter at this latitude are certainly well adapted to endure extreme weather conditions-unlike me!