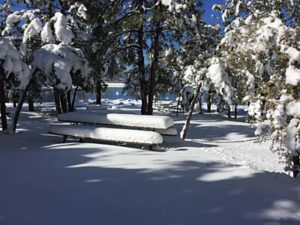 Last Saturday, I participated in the Midwinter Bald Eagle Survey under the direction of the Prescott National Forest Service. Teams of individuals volunteered to cover each of the main lakes in the Prescott area: Lynx, Goldwater, Watson and Willow.

Several weeks ago, I had the opportunity to choose which lake I wanted to cover, and I chose Goldwater Lake. Little did I know then that the Bradshaw Mountains were going to get three days of heavy snow! Talk about deja vu. The conditions at Goldwater Lake for the eagle survey were similar to the conditions on the day of the Audubon Christmas Bird Count last month when I was assigned to cover Granite Basin.

It was very cold-in fact, ice crystals formed on all of my equipment, including my tripod, scope and carrying case. It got to the point where I could hardly see through my scope,

as the lens became frosted over.

Even though the roads to both lakes were closed, we had permission to access both upper and lower Goldwater Lakes to conduct the survey. Two of us hiked to upper Goldwater Lake, and one team member hiked down to lower Goldwater Lake. By 7 a.m., we were all in position, ready to begin logging our observations until the count period ended at 11:00 a.m.

We didn’t have to wait long to see our first Bald Eagle. At 7:29 a.m., a juvenile flew up over the dam from Lower Goldwater Lake and perched in a ponderosa pine on the opposite side of the lake. I assumed it would be the first of several Bald Eagles that we would see, as in the past I have seen up to a dozen eagles at Goldwater Lake.

In the end, after standing in the snow for four hours, the first eagle we saw was the last eagle we saw. It was a surprisingly quiet morning as far bird activity goes. I suspect it could have been weather-related, as the three previous days were pretty harsh conditions for wild birds.

In spite of not seeing any more eagles, the waterfowl on the lake provided plenty of bird watching opportunities. Although the lake was about sixty percent frozen over, we saw American coots, a great blue heron, mallards, shovelers, ruddy ducks, pied-billed grebes, common goldeneyes and a good number of hooded mergansers.

The hooded mergansers were enjoying great success catching crawdads, one right after another. Each time one would surface with a crawdad, he would immediately get chased-either by another merganser or by coots attempting to steal their food. The size of the crawdads the mergansers were catching and swallowing was pretty impressive!

I was surprised by the presence of a belted kingfisher at the lake. Since most of the shallow water near the shoreline was frozen over, I don’t know how much success the kingfisher was having diving for fish.

Some of our non-waterfowl observations included ravens, bridled titmouse, western bluebirds, acorn woodpeckers and northern flicker. I heard other species that I never saw, such as Steller’s and western scrub-jay, mountain chickadee and pygmy and white-breasted nuthatches.