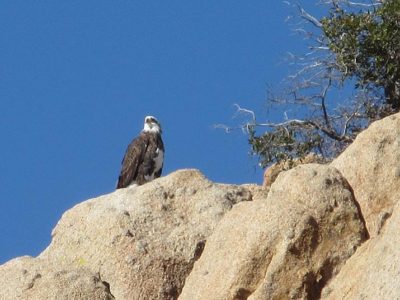 This past Saturday, I participated in the annual midwinter Bald Eagle survey sponsored by the Prescott National Forest. A group of birders was assigned to each of the major lakes in the Prescott area – Watson, Willow, Lynx and Goldwater.

I covered Goldwater Lake and had a great morning. I saw five times as many Bald Eagles this year as compared to last year. That probably sounds like a lot, but last year I only saw one!

The count period started at 7 a.m. and concluded at 11 a.m. I was in place, with my all of my gear, including spotting scope, binoculars, field guide, note-taking supplies, warm clothes, food and water. Of course, at 7 a.m. it is still virtually dark, but I didn’t have to wait long to see my first eagle.

My second Bald Eagle sighting came just moments after I saw the first one. When the first eagle landed, I discovered that there was another eagle already in the same tree. I suspect it was probably there when I arrived, but, as it was so dark, I didn’t see it until later when it got lighter.

Bald Eagle number two was very unique—it had a white head and tail, like an adult eagle should, but it also had a white belly! Using my iPhone, I was able to get one picture of the eagle through my spotting scope. Eagle number two didn’t stick around too long. At 7:37, it flew west in the direction of lower Goldwater Lake.

My third eagle sighting was at 7:56. I didn’t see what direction it flew in from so I didn’t even know it was there until I starting hearing its vocalization. It only took me a second to find it once I heard it. It was perched in a ponderosa pine tree high up on the hill on the south side of the dam, and was a beautiful adult eagle with normal plumage. It stayed until 8:25 and it flew due east when it left, never to be seen again.

At 9:31, I spotted my fourth Bald Eagle—it was flying from the direction of lower Goldwater Lake right towards me. When it got about half way across Goldwater Lake, it made an abrupt left turn and flew due north until it was out of sight. When I first got my binoculars on the bird, I could see that it was an adult and that its tail looked really ratty. However, when it turned to fly north, I noticed it was carrying a sprig of ponderosa pine in its talons, which extended the length of its tail.

What I thought was a ratty looking tail was, in reality, possible nest-building material. This is potentially a very significant find. The only Bald Eagle nest we know of in the Bradshaws is at Lynx Lake. Could it be that this eagle is working on a nest near Goldwater?

My last eagle sighting took place between 9:44 and 10:38, when a first year bird flew up from lower Goldwater Lake, landed in a pine tree and hung around until it left, flying back in the same direction from which it came. Five Bald Eagles in one morning made for a pretty special day!