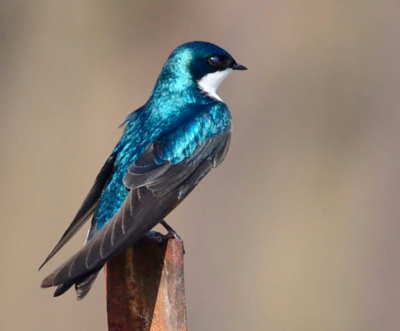 Last week I was in Provo, Utah, for a few days and had the opportunity to go bird watching at Utah Lake early one morning. There were literally thousands of birds — it was an impressive sight to see so many birds congregated together.

By far the most numerous species were swallows, which is an indication that there were a lot of flying insects! I saw five swallow species — barn, tree, cliff, bank and northern rough-winged.

As we birded, we walked along a dirt road separating the Provo airport from the lake. From this vantage point we could see water birds in the reeds and on the water, and songbirds in the vegetation along the road. In the direction of the lake, we saw gulls, terns, grebes, ducks, herons, egrets and ibis.

In the direction of the airport, and along the road, we saw Bullock’s orioles, western and eastern kingbirds, song and lark sparrows, marsh wrens, yellow-headed blackbirds, yellow warblers and even a few black-capped chickadees.

We also got fantastic looks at a lone loggerhead shrike, a species that is typically skittish, but we were able to get within probably twenty feet of it, which is very unusual.

Why was there such a high concentration of insect-eating birds along the road by the lake? There were swarms of midge flies — a small, non-biting insect commonly found near lakes and ponds. Midge flies look a lot like mosquitos, but fortunately they do not bite, suck blood, or carry diseases like mosquitoes.

If you have ever gone for a walk, run, or bike ride on one of the trails that circumnavigates Willow Lake, you have surely encountered midge flies — probably by the thousands. To humans, midge flies can be a nuisance. Outdoor activities can be difficult, as they can be easily inhaled into the mouth and nose and can get into your eyes and ears.

However, if you are a bird preparing for migration, this is an abundant food source. It was obvious that the birds were gorging themselves on the midge flies in preparation to migrate — especially the swallows and the kingbirds.

It was interesting to contemplate that the birds I was seeing at Utah Lake could very possibly show up at either Watson or Willow Lakes in the next few weeks as they migrate southward.

Even though it is only the middle of August, many bird species are already on the move, heading south for the winter. This is especially true of hummingbirds — it is peak season for migrating hummingbirds — you might consider putting up more feeders for the next few weeks. Right now, I think I have more rufous hummingbirds in my yard than Anna’s.

What should you be on the lookout for in your yard right now? Besides our summer resident black-chinned and Anna’s hummingbirds, look for rufous, broad-tailed and possibly a calliope hummingbird at your feeders.

With post-breeding dispersal, there is the possibility of seeing Costa’s, broad-billed, and magnificent hummingbirds as well. These hummingbirds are much rarer in our area, but there are documented occurrences of each of these species here in Prescott.

The reason I mention all of these species is so you don’t get complacent or casual as you watch all of the hummingbird activity in your yard. With so many hummingbirds coming and going, you really need to look closely for the rare ones that occasional show up here.

With the combination of male, female and juvenile plumage, identification of hummingbirds can be more difficult this time of year. Of course, identification is certainly a lot easier when you see a male.