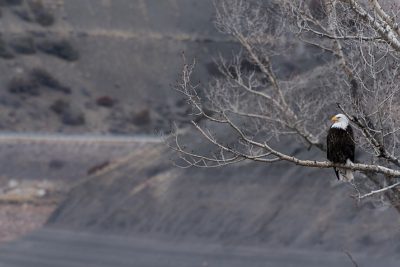 This past Saturday, I was part of a team assigned to cover Goldwater Lake for the annual mid-winter bald eagle survey for the Prescott National Forest. At the same time, there were other teams stationed at our local lakes — Lynx, Watson and Willow — covering their assigned area for the same time period, from 7 to 11 a.m.

The technique for the bald eagle survey is very different from the Christmas Bird Count, where I covered a large geographic area and walked and drove miles and miles in my area. This was a “fixed-point” survey, meaning I didn’t move more than a few feet from the fixed point for the whole four-hour survey period.

One of the reasons for conducting the survey simultaneously at four locations is to reduce the likelihood of double counting. As we observed an eagle, we made notations from what direction it flew in, what time it left the area, the approximate age of the bird (based on plumage) and in what direction it was headed when it left.

If our group saw an adult bald eagle at Goldwater Lake flying north at 8:34 a.m., and an adult flew into the Willow Lake area from the south at 8:59 a.m., there is a strong possibility that the bird observed at each survey location was the same bird. After the survey, each team’s observations are reviewed and tallied to try to determine the total number of bald eagles observed between the four survey locations.

For the day, I felt our team did great!  To the best of our knowledge, we documented nine different bald eagle sightings at Goldwater Lake during the four-hour count period. Two of the nine were adults, and the remaining seven juveniles varied in age including a first-year bird and several second- and third-year birds.

In spite of having snow only a few days prior to the count, the conditions at the lake were not too icy — except for the lake itself. I estimated that at least 95 percent of the surface of the lake was frozen solid, so there was only a small area with open water.

The lack of open water concentrated the water fowl into a very small area – directly in front of our assigned fixed point, which worked out well. While I was there to count bald eagles, I identified all of the different species I either heard or saw during the four-hour period.

There were a good number of hooded mergansers, common goldeneye and mallards and a handful of ruddy ducks, pied-billed grebes and American coots in the water. Personally, I think male hooded mergansers are one of the prettiest birds in North America! We also observed several small groups of common mergansers as they flew over the lake looking for a place to land, but they never did.

One of our more interesting sightings was a lone Say’s phoebe hunting for insects out in the middle of the lake from the surface of the ice. We watched the phoebe as it actively gleaned for insects. It flew up from the ice, caught an insect, and landed on the ice — then repeated the process over and over again. We also saw six great blue herons standing on the ice and perched in the trees around the lake!

During the count period, there was a good variety of high-elevation forest birds present such as Steller’s jays, acorn woodpeckers, western bluebirds and pygmy nuthatches.  I was especially excited to see several red crossbills during the count time frame.