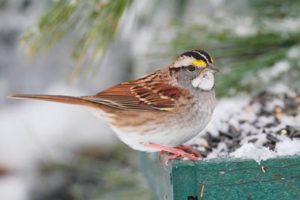 This past week I had the opportunity to spend a few days in San Diego over the spring break holiday. Naturally, my focus was on finding birds! I was fortunate to have the help of a good friend who lives in San Diego – and he just happens to be an excellent birder.

Following the boat ride, we birded downtown San Diego in a small city park and enjoyed success in finding a Black and White Warbler and a White-throated Sparrow. We also birded San Diego Bay and in the community of Coronado where we found a Pine Warbler.

On Wednesday, I went with my daughter Kara to the San Diego Zoo for the first time, and I really enjoyed it. The exhibits were well done and the varieties of animals were impressive. I especially liked the walk-in aviaries (go figure). The collection of birds in the aviaries was incredible. Following the Zoo we birded until after dark – looking for Lesser Nighthawks, which we missed, and Common Poorwills, which we got.

We designated Thursday as our ‘Big Day.’ Like the movie ‘The Big Year,’ we were trying to see as many bird species as we could – but in one day. The key to seeing a variety of birds is to visit a variety of habitats. We birded at rivers, in coastal sagebrush, at man-made lakes, at San Diego Bay and in salt marsh habitats – eventually ending up at the ocean. As we saw new species throughout the day, I added them to my “trip list,” and by the end of Thursday we were at 148 species for the trip – not counting additional species that I heard (and identified by sound) but that I did not see.

Each day was filled with birding, from sunup to sundown and beyond – I was exhausted each night! I really enjoyed the trip, though, because I had a birding companion who lives in the area, who knows the birds, and knew where to go to find them. The whole experience underscored for me the value in having a guide when I am birding in an unfamiliar area.

To locate many of the rarer species, we relied on rare-bird sightings that were posted on a San Diego rare bird alert Yahoo group. Reading the emails gave us direction as to what was being seen, and where. We enjoyed great success in “chasing” some of the rare birds that had been reported. For example, we saw a Prairie Warbler and a Bay-breasted Warbler at Lower Otay Lake based on information that was posted online. We never would have found these species without the posting.

I admit I am not very good at identifying water birds, but I had great looks this past week at a variety of loon, grebe, gull, tern, duck, and shorebird species that really helped me advance in my knowledge and experience in identifying water birds. If you are in a rut and tired of seeing the same old birds, all you need to do is go to a different habitat and you are assured of seeing new birds.