Looking for birds and finding a bobcat 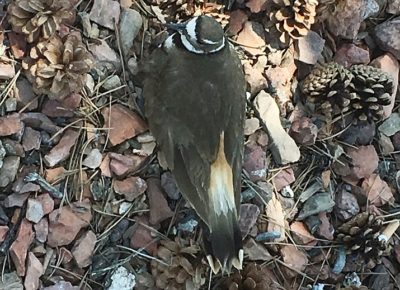 I managed to get out and do a little birding during the Memorial Day weekend.

I spent time out by the airport and at both Watson and Willow Lakes, as well as a long bike ride from the intersection of Rosser and Highway 89 out towards Prescott Valley on the Iron King Trail.

But my best sighting this week was not a bird — it was a bobcat, and I had a very close encounter.

I was at Willow Lake, bushwhacking out onto a heavily vegetated spit of land surrounded by water. As I pushed my way through the vegetation, there were many birds that had congregated together and were making all kinds of danger and distress calls.

I thought it was odd that they were so agitated by my presence, but I pushed on to a point where I decided I wouldn’t go any further. Within seconds of stopping, I saw some movement out of the corner of my eye. I saw something slowly advancing through the vegetation, and it was focused on me.

Instantly I realized that the birds were not alarmed by me; they were all aware of the bobcat’s presence, and they were letting everyone in the area know of the danger.

I stayed motionless and didn’t even attempt to bring my binoculars up to my face. The bobcat was so close that I didn’t need binoculars to get a good look at it.

The reason it was slinking past me was that it was trapped in a sense, surrounded by water on three sides, and the only way to escape without getting wet was to get by me. It crept slowly, making its way past me, then quickly disappeared into the thick vegetation.

This is the second bobcat sighting I have had in the last two months. In April, I saw a good-sized bobcat at Bubbling Ponds, near Page Springs Fish Hatchery. That cat was large and walked nonchalantly, as if it didn’t have a care in the world. I felt it was aware of my presence, but it didn’t seem to care.

Another experience I had this past weekend was a pair of killdeer doing their ‘feigning injury’ display to lead us away from their nest site. While we came across their nest site unintentionally, they put forth their best efforts to distract us and lead us away. If you have never had this experience, it is really a sight to behold. The birds flail and flap their wings and lie down on their side to make a convincing case that they are injured and potentially an easy catch for a would-be predator.

However, as you get closer to them, they jump up and run away, leading you away from their ‘nest.’  The nest is really not a nest, but their clutch of eggs, laid directly on the ground, a location highly susceptible to predation if they were to be found.

We were walking on a trail in Watson Woods, and one of the killdeer led us down the path, probably thinking it was doing an excellent job of leading us away from its nest site. In reality, it was leading us in the direction we were heading anyways.

What was impressive, though, was its speed. Killdeer are in the plover family and relatively long-legged. They can really run. Seeing the Killdeer was like watching a quail running away from us. Eventually, when we were about 300 feet from where all of this deception began, the bird burst into flight to return to its nest.

Eric Moore is the owner of Jay’s Bird Barn, with three locations in northern Arizona – Prescott, Sedona and Flagstaff. He has been an avid birder for more than 50 years. Email your questions about wild birds to eric@jaysbirdbarn.com.