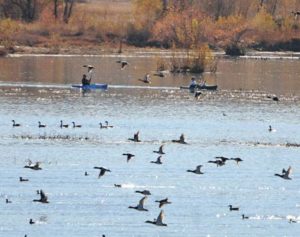 The hot, dry months of May and June saw the water levels at Willow and Watson Lakes drop drastically. As the lakes were drying up earlier this summer, it was looking very bad for all of the waterfowl that are dependent on the lakes.

Folks who are relatively new to the Prescott area may not know a lot about the history of the lakes in Prescott. The dams that created both Willow and Watson Lake were constructed in the early 1900s by the Chino Valley Irrigation District to capture spring runoff. The water in the lakes was used each year to irrigate crops in Chino Valley during the summer months.

It wasn’t until 1997 that the City of Prescott purchased the two lakes from the Irrigation District. While neither lake is natural, each provides a tremendous benefit to wild birds – especially migratory birds. There are many species of water birds that migrate over land instead of following a coastal route.

From September through April, thousands of ducks and countless numbers of grebes, geese, and an occasional loon or swan use the lakes as a place to winter-over. While portions of the lakes typically freeze over in winter, the lakes generally stay open during the winter, providing critical food sources.

The importance of these two bodies of water to the many bird species that rely on them led to their being designated by the National Audubon Society as an Important Bird Area. Our small manmade lakes are of national importance! They provide essential habitat for over 100 different species of birds at different times of the year.

There are a series of small creeks that are part of the Granite Creek watershed, including Miller Creek, Bannon Creek, Aspen Creek, Butte Creek and Manzanita Creek. Each of these creeks eventually flows into Granite Creek, which feeds Watson Lake.

Willow Lake is fed by Willow Creek, but it does not have tributaries that contribute sufficient water to fill Willow Lake. Typically, Watson Lake fills up faster and stays full longer than Willow Lake.

The rainstorm that hit the Prescott area this past Friday was just what our shrinking lakes needed. Runoff from the various creeks dumped a lot of water into the lakes.

As soon as the rains subsided Friday evening, I rode my bike down to Granite Creek and surveyed the wooded areas north and south of the Prescott Lakes Parkway – commonly known as Watson Woods. The runoff from the storm turned the usually dry creek into a raging river. I estimated that the “creek” was at least four hundred feet wide as it flowed through Watson Woods before emptying into Watson Lake.

It was a sight to behold! The good news is that all of this runoff has raised the water level of the lakes, preventing the lakes from drying up this year. Fall migration is already underway, and over the next two months, thousands of birds will be passing through Prescott. I am confident there will be enough water in the lakes until our winter storms arrive.