Local bird housing starts are up 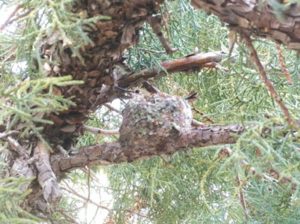 In last week’s column, I mentioned that I have an Anna’s Hummingbird nesting in an alligator bark juniper tree in my front yard. It has been more than two weeks now since I first discovered the nest. Every time I check, the female is diligently sitting on the nest. I often wonder when she slips away to eat. We also have a pair of ravens nesting in our yard!

This past week, I led two bird walks – one for the Highlands Center for Natural History, and one for Jay’s Bird Barn. On both walks, we found several examples of nesting activity.

On the Jay’s Bird Barn Bird walk, we saw several bird species gathering nest-building material and making repeated visits to their respective nesting cavities – including a House Wren, a White-breasted Nuthatch and a pair of Western Bluebirds. The bluebirds’ nesting cavity was in the open, and it was easy to observe them coming and going.

Over the last several weeks, I have been watching several pair of House Finches here at the Bird Barn vying for the one nesting box that we have mounted under the eaves in the front of the store. I noticed this week that one pair eventually won out. They have already finished building their nest, and the female is sitting on it.

All of these examples of nest-building activity demonstrate that breeding season is in full swing for many of our year-round bird species. Another term that could be used for year-round species is non-migratory. Species that do not migrate typically nest earlier than migratory birds because they spend their whole life cycle in their breeding grounds – winter, spring, summer and fall.

Interestingly, while many of our local bird species are beginning to breed, we are still seeing some of our migratory winter birds that haven’t left the Prescott area yet for their breeding grounds. It won’t be long, though, before our winter visitors head north where they will begin to establish breeding territories and start nest-building activities.

Many of our migratory birds that summer here are not back; therefore they are not nesting as of yet. Over the next several weeks, our summer residents will be filtering in, such as Black-chinned Hummingbirds, Broad-tailed Hummingbirds, Black-headed Grosbeaks and Bullock’s Orioles.

Bird species that rely on cavities in trees are typically found in forested areas with Ponderosa Pine. Examples of a few of the more common cavity nesters in the Prescott area include Ladder-backed Woodpeckers, Acorn Woodpeckers, Northern Flickers, White-breasted Nuthatches, Western Bluebirds and wrens.

In an oak/chaparral habitat, most bird species do not rely on nesting cavities. Instead, they build a cup-shaped nest in a tree or shrub.

There are some bird species that actually build their nests directly on the ground such as Gambel’s Quail and Spotted Towhees.

Providing man-made birdhouses and nest-building material is a good way to encourage birds to take up residence in your yard. However, the most important thing you can do to encourage nesting is to have a yard filled with wild, native habitat.