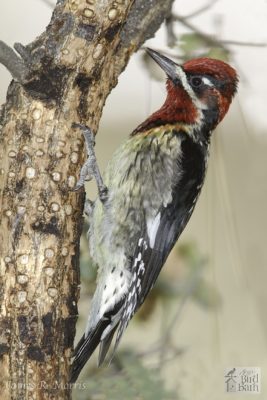 This past week there has been a red-naped sapsucker hanging out in my yard.  There are four different sapsucker species in North America:  red-naped, red-breasted, yellow-bellied and Williamson’s.  Sapsuckers are small woodpeckers and are quite striking in appearance due to their coloration.

As the name implies, a major component of the sapsuckers diet is sap.  Using their chisel-like beak, they create a series of holes in the trunk of living trees so the sap will ooze out.  It is not uncommon for sapsuckers to have a favorite tree where they will create thousands of small, evenly spaced holes up and down the trunk.

As the sap oozes out of the tree, it becomes available to bugs and other bird species that are also attracted to the sap as a food source.  During winter months, both ruby-crowned kinglets and hummingbirds will consume the sap, along with the sapsuckers.  When you think about it, it makes sense that hummingbirds are attracted to sap.  A good analogy of sap is what we as humans do to sugar maple trees.  We put a tap in the tree to drain the sap, which is then processed to create sweet syrup and candies.

Sap provides both minerals and a caloric benefit to birds and sometimes insects get caught in the sticky sap, making an easy meal for woodpeckers and other birds that glean the insects from the sap.

There is a total of 22 different woodpecker species in North America.  Interestingly, it is possible to see 14 of these species in Arizona!  The diversity of habitats in Arizona contributes to the unique distribution of woodpeckers throughout the state.

One of the 14 woodpecker species found in Arizona is fairly nomadic and can be found from year to year in a variety of different habitats and locations.  This species is called a Lewis’s woodpecker, and was discovered by the Lewis and Clark expedition.  Here in Arizona, I have seen this species in Wickenburg (desert), Peeples Valley (high desert grassland), and in the Sierra Prieta Mountain Range (ponderosa pine forest).  Talk about adaptability!