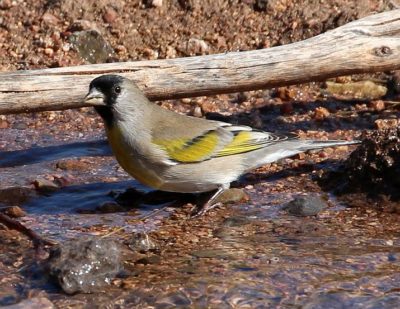 Over the past month or two, there have been several reports of Lawrence’s goldfinches in the Verde Valley and in the Prescott area. This is a species that summers in California and winters in southern Arizona. This west-to-east migration pattern is unusual in the bird world. The typical migration pattern for most birds in the northern hemisphere is a north-to-south pattern.

I have lived most of my life in Arizona, and I have only seen Lawrence’s goldfinch on a handful of occasions — mostly at the Hassayampa River Preserve in Wickenburg. Two weeks ago, a small flock of Lawrence’s goldfinches was discovered during the Prescott Audubon Society Christmas Bird Count at Prescott Canyon Estates, near Lowe’s off of Highway 69.

Recently, several individuals have posted information on eBird reporting Lawrence’s goldfinch sightings at Watson Woods, including a post this past Sunday where someone saw 35 of them!

In spite of the snow and cold temperatures, I went birding on New Year’s Day in hopes of finding the goldfinches at Watson Woods. It was super cold, but my efforts were well rewarded — I had an awesome time bird watching. After about an hour of tromping around in the snow, I found a flock of Lawrence’s goldfinches on the east side of the Peavine Trail between the restrooms at the trailhead and the first bridge.

Speaking of a merlin — I had one in my yard this week! The day after Christmas, I was in my living room when someone remarked there were a lot of feathers floating in the air in the backyard.

I quickly moved to the sliding glass door to see what was going on. Initially, I saw a small sharp-shinned hawk down on the ground. Then some movement caught my attention, and just a few feet away from the sharp-shinned hawk I saw a merlin struggling with a robin.

Merlins are described in The Sibley Guide to Birds as “small, compact, and powerful.” These small birds of prey are in the falcon family, and are listed in the Sibley guide as being only 10 inches long. American robins are also listed as being 10 inches long! However, a merlin weighs in at 190 grams, while a robin only weighs 77 grams.

After a minute or two, the robin succumbed to the merlin’s attack and the merlin began plucking the feathers from the lifeless robin. It was an amazing experience to witness nature in action taking place just 12 feet from our back door! I don’t ever recall seeing a merlin in my yard before, so it was really a thrill.

I have already started to put my 2019 bird sightings into eBird. I finished 2018 with 597 species observed. I was hoping to hit the 600 species mark, but fell short. 2018 was a banner year for me, thanks to the amazing Costa Rica trip last February. At this point, I have no plans for any international birding trips this year, but that is not to say that I wouldn’t love to go on another trip very soon.