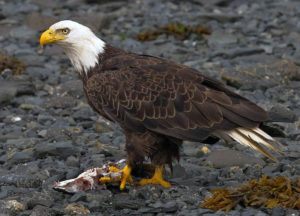 This Saturday, Jan. 12, Jay’s Bird Barn will be assisting Prescott National Forest Wildlife biologists conducting a bald eagle survey. Four teams of volunteers have been assigned to each of the four lakes in the Prescott area – Lynx, Goldwater, Watson and Willow.

The survey start time is 7 a.m. and ends at 11 a.m. Immediately following the survey, the teams will meet at Zeke’s Restaurant in the Frontier Village to enjoy a meal – Dutch treat. Now if that isn’t enough incentive to get you to participate, I don’t know what else I can do to bribe you.

During the winter months, on any given day, you can easily see one or more bald eagles at any of the lakes in the Prescott area. Goldwater Lake can potentially host a lot of bald eagles each morning. One day I saw 12 bald eagles there! Of course, you never know from one day to the next where they will be hanging out, and that is why each of the lakes is being surveyed on the same day at the same time.

I have reviewed the standardized survey form in preparation for the survey, and the possibilities have me a little excited. The form lists a variety of survey methods including road vehicle, fixed wing, helicopter, boat, skis, foot travel, snowmobile, fixed point and “other.”

I have to admit it would be pretty exciting to participate by helicopter or on skis or on a snowmobile, but my group will not be doing anything so exciting. We will cover the north shore for a period of time before moving to the south shore, so there will be a little driving involved along with some walking.

We are bound to encounter a great variety of birds while in the field. Over the last few weeks, there have been some snow geese and a few tundra swans at Willow Lake. The lake is loaded with a variety of ducks, and who knows what else we might discover while we are looking for eagles.

Historically, the area around Willow Lake has been a great place to see a variety of raptors in winter including red-tailed hawk, morthern harrier, Cooper’s hawk and American kestrel, and there is even the remote possibility of seeing both peregrine and prairie falcon.

That is enough motivation for me to go birding, even if the predicted high for Saturday is 32 degrees and the morning low is forecasted to be only 13 degrees! I think I’d rather be looking for harpy eagles in the jungles of Brazil where both the temperature and the humidity were in the 90s!

When I was in Brazil two years ago, this was one of our target birds for which we were diligently searching – to no avail. It is the largest and most powerful eagle in the world.

In spite of growing up in Tucson and loving the heat, I have to admit that the time spent searching for the harpy eagle in the jungles of Brazil was intense! I have never felt heat like that anywhere.