Is it spring already? 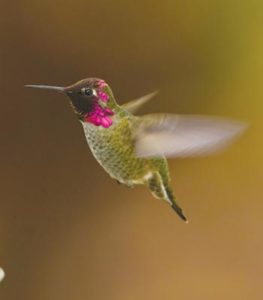 This past Wednesday, as I was hiking the East Bay trail at Willow Lake, an Anna’s Humming-bird flew directly over me, singing its scratchy tune as it flew by.

Later the same day when I was in my cul-de-sac in front of our house, I saw another Anna’s Hummingbird. Two hummingbirds in one day, on Jan. 22! I think the warm weather down in the valley is prompting them to move up in elevation.

I have also noticed this past week that the forsythia plants in our neighborhood are blooming already.Wow, it is just way too early for that to be happening. I am hoping Old Man Winter has a few more storms in store for us, as we certainly need the moisture.

On Wednesday, I birded the Willow Dells area near Willow Lake dam. I had a target bird in mind – a Pacific wren had been reported in this area over the last few weeks. This is a relatively “new” wren species, as it was recently split from the winter wren. Winter wren was originally considered one species with a “Western” and an “Eastern” race, but was recently split into two species. The Western race of the winter wren has been renamed a ‘Pacific’ wren, which now can be counted as a separate species.

As I descended the long stairway that goes down to the backside of the dam, I heard the Pacific wren. Within a few short minutes I was able to locate it and got fantastic views of it. No sooner had I gotten the Pacific wren, when I heard the raspy call notes of a house wren. Again, I was able to locate it in just a few minutes and I got great looks at it.

The next bird I heard was also a wren – a canyon wren. I hadn’t seen one yet this year, so I decided to track it down so I could add it to my state list. It was moving around some fallen logs, searching for insects. At one point, the Pacific wren had moved over to the area where the canyon wren was, so I was able to observe both species at the same time.

Can you guess what the next bird species I heard was? If you guessed a wren you’re right. I was hearing the call notes of a rock wren, and it was easy to find. It flew onto the top of the dam and did its bobbing motion of deep knee bends, which aided in identification.

Wow, four wren species in fifteen minutes! I was jazzed. But I wasn’t done. Yes, the next bird I heard was another wren species–this time a Bewick’s wren – and I didn’t have any problem locating it, either.

I was so excited to see five different wren species in about a twenty-minute time period all within a hundred yards of one another.

We are looking for homeowners willing to host small groups of birders for the Great Backyard Bird Count President’s Day weekend. We will be leading free guided bird walks to private residences to tally the birds we see. Please call the Prescott store at 443-5900 if you would like to host a group, or if you would like to go on one of the bird tours, which will be on Friday, Saturday and Monday, Feb. 14, 15, and 17.