Is it nesting season already? 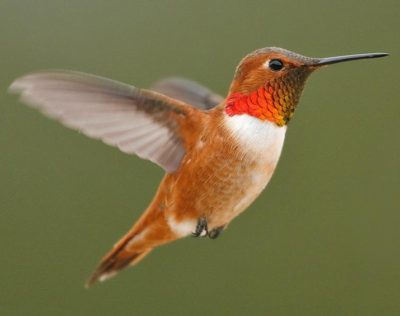 Be on the lookout for rufous hummingbirds as they move through the area on their way north over the next several weeks. (Courtesy)

What a difference a week makes as we compare the weather this week to just over a week ago! All of the snow has melted, and the birds are singing as if it were already spring!

Another indication of spring’s rapid approach is a new bird in my yard this week—I had a rufous hummingbird drinking at one of my feeders on Tuesday!  I’m sure both the gathering of nesting material and a rufous hummingbird showing up sounds early to you.  While our nighttime temperatures are still dipping below freezing, believe it or not Anna’s hummingbirds are already building their first nest of the season!

Most people have in their mind that breeding in a one-time event, but the best way to look at it is as a ‘season’—breeding season.  Depending upon the species, breeding activity can begin as early as January or February—such is the case with Bald Eagles and great-horned owls.  Breeding season can also start as late as June for yellow-billed cuckoos and lesser goldfinches.

The onset of breeding activity is also affected by location and migration.  What I mean by location is the fact that there are many bird species in the Arizona Central Highlands that are here year-round.  Since they are permanent, non-migratory residents, many of these species tend to start breeding early in the year.  For example, mourning doves are also in the midst of building their first nest of the season and laying their first clutch.

Migratory birds, however, haven’t starting breeding because they haven’t arrived yet!  The arrival of migratory birds is someone staggered, with some species showing up earlier than others.  The activity of courtship, pairing up, nest building, breeding, and rearing young is initiated by most migratory birds shortly after they arrive in their breeding grounds.

Some of our summer residents such as black-headed grosbeaks, cliff swallows and black-chinned hummingbirds are still six to eight weeks away from arriving in this area.  Their breeding activity won’t start until after they have returned and start to set up shop, so to speak.

It is interesting to look at when breeding starts for different species, as there are many factors that contribute to the timing.  One of the main issues is the availability of food sources needed to rear young.  Gambel’s quail, for example, is a year-round resident.  However, this species doesn’t start breeding until May when there is sufficient food available to the chicks when they hatch out.

Delayed breeding is common in another one of our very abundant year-round bird species—lesser goldfinches.  Even though they are here all year, they wait to breed until the food sources they rely on to feed their young are available.

Another thought to consider is the frequency of breeding.  As mentioned earlier in this column, breeding for many species is not a one-time event.  There are many species that will have more than one clutch of eggs.  Mourning doves, for example, will frequently raise three broods during the nesting season.

As you consider when to provide nesting material in your yard, you need to think in terms of wild bird nesting as an event that begins early (now) and continues clear through the month of September for some species.