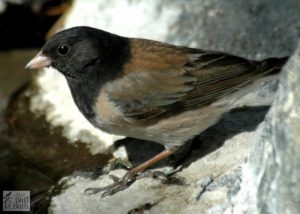 The night before the bird count, a fast-moving winter storm blew through Prescott. First was rain, followed by a dramatic and sudden drop in temperature, which caused the rain to freeze instantly, followed by snow.

Wednesday morning was bitter cold – everything was coated with a layer of ice. We started birding at about 7:30 a.m. and finished just before 5:30 p.m. The day ended up being absolutely gorgeous – by mid-afternoon it was cloudless and sunny – but it was still very icy and cold.

Finding birds was challenging throughout the day – for the most part they were really hunkered down. Our persistence paid off ever so gradually as the day unfolded. We just kept going, walking, searching and listening, and every so often we would stumble across a lively flock of birds. When the mixed flock of birds moved on, the area would once again be silent and devoid of bird activity.

One of our better finds was a Bald Eagle. We were in a forested area when I first caught a glimpse of a large bird in flight, but it was obscured by all of the trees in the foreground. My initial reaction was that it was a raven, but as it flew into view I changed my mind very quickly, thinking that it might be an eagle. Finally it cleared all of the trees and it was unmistakably a Bald Eagle.

The most abundant species of the day were Dark-eyed Juncos and Ruby-crowned Kinglets. Kinglets are very small songbirds that are constantly busy as they forage for food in trees and shrubs. It seemed that everywhere we looked we saw kinglets. However, there is another kinglet species that we were specifically looking for – the Golden-crowned Kinglet. With great persistence and perseverance, we finally found one off trail 261 near the kiosk marking the Wilderness Area boundary.

Our best find of the day was a Red-breasted Sapsucker, a rare winter visitor to Arizona. It was a very cooperative bird, preferring a specific Ponderosa Pine tree, and even a specific spot on the trunk of that tree. It was busily harvesting sap from a sap well that it was actively working on. When it was frightened and would fly away, it would always return minutes later to the exact same spot, making it easy to observe.

In addition to the Red-breasted Sapsucker, we also saw several Red-naped Sapsuckers, which were great for comparison. I was determined to see a Williamson’s Sapsucker as well. I thought it would be fairly easily to find at least one, but I was mistaken. We worked and worked all day to find one. Finally, after the sun had already set in the basin, we saw a male in flight, flying over the Ponderosa Pines.

I watched the direction of its flight, and hustled over to a large pine where I thought it might have landed. Sure enough I was able to locate it on the trunk of a tree. This was our seventh woodpecker species for the day! It was so rewarding to add another species to our tally so late in the day, bringing our species total to 38 for the count.

As the year winds down to a close, I thank you for your friendship and support. Many wishes for a wonderful New Year in 2013.