I spy a mystery bird! 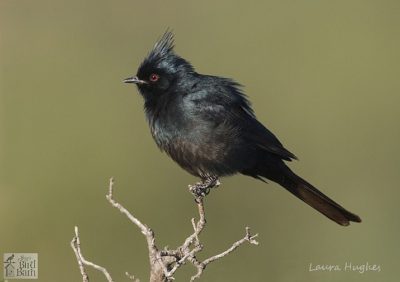 On a regular basis, I receive emails requesting bird identification help. Sometimes these emails include an attachment with pictures. This week, however, I received an email with an audio file asking me to identify a bird based on the vocalization captured in the recording.

Bird identification requires a collection of clues — kind of like putting puzzle pieces in their proper place. Sometimes I have to respond to customer questions with questions of my own so I can gather more information to aid me in the identification process.

Oftentimes the questions are things like, “Where do you live?” so that I have a reference point for the habitat where the bird was observed. I may ask, “What was it eating?” or “What was its behavior?” or even “Was it down on the ground or up in a tree?”

Recently I received the following email message: “We attended a 4th of July BBQ in Granite Oaks and observed dozens of what we were told were ‘black cardinals.’ In all the years that we have lived in Williamson Valley, we have never seen such a bird. Could you shed some light on these birds? They were crested like a cardinal and had all the appearance of such but …black?”

While this bird was a mystery to the person who emailed me, I knew exactly what it was — without pictures or recordings. Their ‘black cardinal’ was in reality a phainopepla. Males are glossy black in color, with bold white wing patches visible in flight, and females are a dull gray color. Both males and females have a ragged crest and bright red eyes.

Phainopeplas are in a small family of birds known as silky flycatchers. There are only four silky flycatcher species in the world, and all of them occur in the New World. However, the name flycatcher is somewhat misleading, for this species spends more time eating berries than insects.

In my yard, I have several berry-producing plants, including elderberry, chokecherry, Oregon grape, hackberry, along with clumps of mistletoe growing in several of our scrub oak trees. Over the last few weeks, several phainopeplas have been frequenting our yard throughout the day, feasting on the ripening berries.

I suspect a lot of people are unfamiliar with this species because it does not eat at seed feeders. This is an example of a species that might be fairly common in your yard, but unless you are out in the yard you might not notice it. I encourage those who love to watch the birds at their feeders to expand their horizons by walking around their property on a regular basis to observe non seed-eating varieties of birds that are frequenting their yard.

In the Central Highlands area of Arizona, phainopeplas are found in areas where there is a high concentration of mistletoe, which is frequently found in scrub oak. This is why there is such an abundance of these birds in the Granite Oaks subdivision in Williamson Valley.

One interesting fact about phainopeplas is their unique breeding behavior. Phainopeplas are migratory and winter at lower, Sonoran Desert elevations. In the spring, before leaving their winter range, they breed and rear a brood to maturity at this lower elevation.

After they are done nesting in their winter range, they migrate to the higher elevations in Arizona—typically arriving in the Prescott area in June. After getting settled in they will breed again and raise another brood here in their summer range. I don’t know of any other species that rears young in both its winter and summer range. That is a very unusual behavior.

Eric Moore is the owner of Jay’s Bird Barn, with three locations in northern Arizona — Prescott, Sedona and Flagstaff. Eric has been an avid birder for over 50 years. If you have questions about wild birds that you would like discussed in future articles, email him at eric@jaysbirdbarn.com.