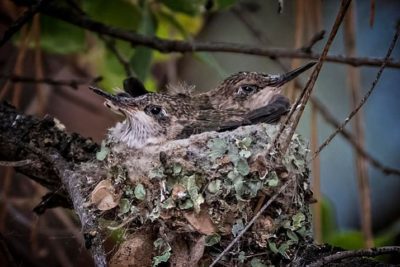 I have a friend who has been monitoring a hummingbird nest he discovered only a few feet off of the main trail at Lynx Lake. He has been photographing the nest since April 25, when the female was still building the nest. I suspect in less than a weeks’ time the babies will be out of the nest.

It takes more than forty days from the time the female begins incubating her eggs until the fledglings leave the nest. It takes about 3 weeks to incubate the eggs, and then another three weeks to rear the young.

Female hummingbirds are heroic moms, while the dads are pretty much a bunch of deadbeats. Other than the act of mating, the males don’t have a lot of parental responsibility. They don’t help build the nest, incubate the eggs or rear the young. All of this is left to the female.

As you might imagine, when baby hummingbirds hatch out of the egg, they are very, very small. Their development is referred to as altricial, which means their eyes are not yet open, they are mostly featherless at hatching, and they are completely dependent upon their mother for all of their needs.

When the babies first hatch out, it is not uncommon for the mom to continue sitting on the nest in an effort keep the babies warm, although that is not much of a concern right now since things have gotten a lot warmer.

I have this funny mental image of what a hummingbird’s egg would look like if their beak developed in the egg, prior to hatching. That would be one strangely shaped egg!

Mother hummingbirds are very attentive to their young, and rarely wander too far from the nest site. Throughout daylight hours, they are constantly foraging for food to bring their babies a balanced diet of nectar, insects and spiders. When feeding their young, the mothers stick their long beak far down into the throat of the babies and regurgitate food for them.

If you have always wanted to find a hummingbird nest, my recommendation is to find a female and track the direction she goes after leaving your hummingbird feeder. With patience and perseverance, the odds of finding a nest are actually pretty good. One of the biggest challenges is knowing what you are looking for. Their nests are so camouflaged you could be looking right at one and not even realize that what you are seeing is a nest.

The nest is usually made up of a lot of soft, downy plant material, bound together with spider webs and finished with an exterior coating of lichen that closely matches the color of the bark of the tree in which they are nesting. It is truly a marvel of nature.

The location of where they build their nest is varied, but typically they are placed fairly low in a small tree. They will also build nests on man-made materials associated with a house, typically under the eaves in a well-protected location. I have seen nests built on an extension cord wire, a clothes line, and on a wind chime!

If you have never seen a hummingbird nest before, and you would like to see one, we keep a nest here at the store in an empty baby food jar. The next time you are in the store, please ask to see it.