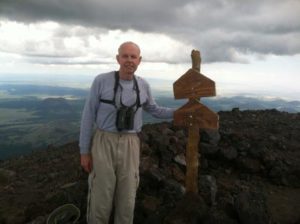 Have you ever wondered if you were to hike to the highest point in Arizona, would you see any birds there? This past week I saved you the trouble of hiking to the top of Humphreys Peak to find out. The answer is yes, but I want you to venture a guess what species you would encounter at 12,633 feet in elevation.

As you may recall, at the beginning of the year, I created a birding competition called the Centennial Challenge to encourage nature lovers to get out and explore the great state of Arizona during this centennial year.

For the last 21 years, I have lived in Prescott, and I can’t count how many thousands of times I’ve looked at the San Francisco Peaks off in the distance-but I had never hiked them.

A couple of weeks ago I started doing a lot of training hikes in the Prescott area to prepare for Humphreys Peak. Over the last month, I hiked Spruce Mountain, Granite Mountain and Thumb Butte several times, as well as numerous other hikes.

Last week on my day off, I set out to hike Humphreys Peak. The trailhead is at the Snow Bowl ski resort, at an elevation of 9,300 feet. It took me three hours and 45 minutes to reach the top. It was a hard hike-especially the last 1,000 feet in elevation-but I felt all of my recent hiking was good preparation.

The habitat at the summit is considered tundra and is above the tree line. What bird species did you guess that I saw at the summit? The answer is a very common bird found throughout all of North America, so common that the word “common” is part of its name: common raven. There must have easily been two dozen ravens hanging around the top of the mountain. Watching them fly was exhilarating as they are such masters of the sky, taking full advantage of the high winds at the summit.

While my goal was to hike to the summit, my ulterior motive was to bird along the way, which I did. I struck a comfortable hiking pace and birded on both the ascent and descent. It was fascinating to observe what species were present at what elevations. It was not until after I reached 11,000 feet that I began to see hermit, Townsend’s and yellow-rumped warblers!

I was over 12,000 feet when I got great looks at red-breasted nuthatch, ruby-crowned kinglet and mountain chickadee. I am sure they move down in elevation during the winter months, but they are abundant at the higher elevations during this time of year.

At lower elevations, I encountered Steller’s jays-the symbol we use for the Jay’s Bird Barn logo. Other montane species observed include brown creeper, hairy woodpecker and the red-backed form of the gray-headed dark-eyed junco.

For the day, I added six new species to my 2012 state list, which is exactly part of my objective in visiting new parts of Arizona that I have never been to before. The six species that I added to my Centennial list were three-toed woodpecker, downy woodpecker, Clark’s nutcracker, red-breasted nuthatch, hermit and Townsend’s warblers.