Happy Valentine’s Day to all lovebirds 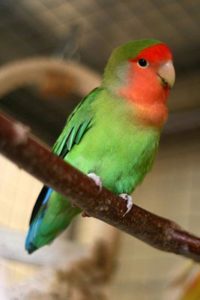 Happy Valentine’s Day! A customer visited Jay’s Bird Barn earlier this week to buy some birdseed to feed a flock of peach-faced lovebirds that are coming to her yard in Scottsdale. Lovebirds… Valentine’s… what a perfect topic for a column.

Peach-faced lovebirds are not native to North America – they were originally brought to the Americas from southwestern Africa. Unfortunately, the pet trade helped make this species a popular caged bird.

Over the years, we have boarded several peach-faced lovebirds in our home for a number of customers and, I have to admit, they are awfully cute, and they have a sweet temperament. I would never own a caged bird, but if I did, I think a lovebird would be a good choice.

As you might ima-gine, over time, some caged birds either es-cape or they are intentionally set free by individuals who do not want to be constrained by pet ownership.

Typically, exotic birds don’t fare too well in the wild – they are poorly adapted to survival in an urban area since their ancestors typically came from tropical locations such as South America and Australia. Most of the vegetation in large cities doesn’t produce the foods that they historically would have found in the wild.

They lack the survival skills needed, having grown up in a cage, with human caretakers. They are unfamiliar with the dangers that lurk in the out of doors such as cats, hawks, glass windows, cars and so many other dangers found in an urban setting.

However, some non-native birds manage to get a toe-hold – whether they escaped or were released – and they form a ‘feral’ population, capable of reproducing young and even growing their numbers. The metro Phoenix area now has a stable “wild” population of peach-faced lovebirds that can be observed in many different parts of the valley.

One contributing factor to their survival in the wild is the food that many homeowners put out for wild birds. When you feed the birds in your yard, you never know what you might see!

Here in the Prescott area, over the last six months, we have received numerous reports of Ring-necked Pheasants, including one just this week in the area of Smoketree Lane and Sequoia. Pheasants are a non-native species to North America – they were introduced from Asia and they thrive in agricultural areas throughout much of the United States.

Prescott is an unusual location for pheasants as we certainly are not an agricultural area. The pheasants that are being reported in the Prescott area must have been either released, or they escaped captivity. Since they have been reported in so many different Prescott neighborhoods, I assume there are several pheasants in the area and not just one bird that is being seen in several different locations.

Chukars are another introduced species that I occasionally get reports of, but not as frequently as pheasants. They are a game bird, and their overall body shape looks like a cross between a pheasant and a quail. On occasion, I receive reports of Bobwhite (quail) in the quad-city area as well.

A quick reminder: Registration for the Verde Valley Birding and Nature Festival is now available online. The festival is April 25-28 at Dead Horse Ranch State Park in Cottonwood. Visit www.birdverde.org to register for field trips, workshops and other events.

If you want to participate in one of the Great Backyard Bird Count bird walks either this Friday or Saturday, please call the store at 443-5900 to sign up, as each group is limited to twelve individuals.