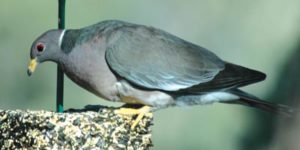 Jay’s Bird Barn led bird walks this past Friday and Saturday, Feb. 13-14, to several homes as part of the Great Backyard Bird Count, sponsored by Cornell Lab of Ornithology. Friday’s group visited one home in Forest Trails and two homes in Williamson Valley. Saturday’s group visited a home in Eagle Ridge (off of Rosser) and one in Inscription Canyon.

The weather was perfect and the hospitality was delightful. At our first stop on Friday the birds were very active – quail, dove, woodpeckers, house and Cassin’s finches, towhees, goldfinches, pine siskins, Bewick’s wren, Anna’s hummingbird, sparrows, juncos and many more species entertained us with their comings and goings.

Our second stop wasn’t as birdy, as it was later in the morning, but we had what I considered a really good find. I was hearing and seeing a yellow-rumped warbler in a pinyon pine tree, so my focus was concentrated on the bird activity in that one tree when I discovered an orange-crowned warbler. For me, this was the bird of the day.

We were trying to stay on a schedule so we left for the last house only to be told later, that about 10 minutes after we left the second house, a peregrine falcon flew over! That would have been an awesome sighting for our group, but it wasn’t meant to be.

At our last stop on Friday, we were overrun with white-crowned sparrows and spotted towhees. The best bird sighting at their home however was a pair of crissal thrashers putting on a digging exhibition. Using their long, curved beaks, they were vigorously digging in the soil in search of food. Crissal thrashers are normally skittish and difficult to see, but these two birds were right out in the open on a bright sunny day providing us with amazing views.

Saturday’s birding tours saw a lot of the same species, the common backyard wild birds that are easy to coax into the yard with seed, suet and water. The highlight at the first home were bushtits busily gathering mouthfuls of nesting material from ‘cottontail nesting balls’ that the owners had hanging in their yard.

If you are not familiar with bushtits, they are tiny gray birds. To give you some perspective on their size, they weigh only one gram more than an Anna’s hummingbird! It is a comical sight to see these tiny birds with huge mouthfuls of nesting material.

Why so many different kinds of birds? Habitat and food are the keys to attracting a wide variety of birds to your yard.

They documented 39 band-tailed pigeons in their yard at one time! You might wonder why seeing pigeons is so special. These are not city pigeons, these are wild pigeons – the largest pigeon species native to North American, with a length of 14.5 inches, a 26-inch wingspan, and weighing 360 grams. A Gambel’s quail for comparison is only 10-inches long with a 14-inch wingspan, and weighs only 180 grams.