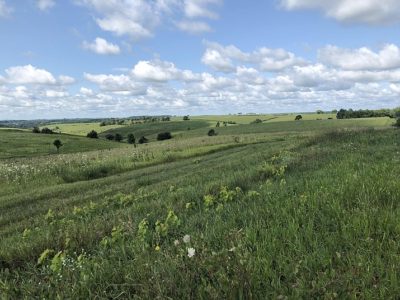 A view of the Barneveld Prairie State Natural Area in Barneveld, Wisconsin, where I added two new birds to my life list — Henslow’s sparrow and sedge wren.

This past week I had the privilege of spending three days at the corporate offices of Vortex Optics in Barneveld, Wisconsin. My relationship with Vortex began when I placed my first binocular order at the Bird Watch America trade show in Atlanta, Georgia in January of 2004.

Since that time, Vortex and Jay’s Bird Barn have both experienced tremendous growth. When we opened in October of 2003 we rented 575 square feet of space from Watters Garden Center.

Fifteen years later, we now have about 10,000 square feet of retail space between our three store locations, plus we have seed storage and seed production space at two YEI facilities in the Prescott area.

In March of this year, Vortex moved into a brand new 282,000-square-foot facility that is state of the art. We toured their operations, had excellent meetings discussing how we could grow our optics business, and, of course, we went bird watching! Vortex has two resident bird experts on staff whose job it is to connect birders with the Vortex brand of optics.

They took Ryan, the Prescott store manager, and me birding for about ten hours one day, and it was awesome. Before we went birding, I went through eBird and made a list of fifteen target birds that I was hoping we would see during our “Big Day.” Most of the birds on the list were birds that I had already seen at some point in my life, but it had been a long time since I had seen them.

My wish list also included a few birds that would be new for my life list. We met in the Vortex parking lot and literally walked from their property directly onto the Barneveld Prairie State Natural Area. Prairie habitat is very endangered due to agriculture, and this critically threatened habitat is home to many species of birds that are totally dependent on a grassland/prairie habitat.

My wish list included things like bobwhite, upland sandpiper, bobolink, dickcissel and woodcock. We saw some of them, and struck out on others. New birds I was hoping to see included Henslow’s sparrow and sedge wren. We got onto the sound of singing Henslow’s sparrows in the prairie almost immediately — but seeing them was another thing.

A lot of birds that live in a prairie habitat are elusive and difficult to see as they hunker down in the thick vegetation. However, we were patient, and eventually saw one that was perched up on a weedy stalk singing its song. Using a Vortex spotting scope, I got great views of this life bird–it was very exciting!

Later the same morning, after stalking singing sedge wrens, we were finally rewarded with several good looks at a couple of sedge wrens. This is a species I have put a lot of time and energy into seeing over the last few years — mostly in Missouri, but also in Texas — and I’ve always come up empty handed.

It was so rewarding to see this small relative of a marsh wren at close range with ten power binoculars. I can truly say it was one of those rare moments where you see a new bird for the first time, and you get really excellent views of it —like a National Geographic moment!

Later in the day, in a deciduous woods habitat, I saw and heard my first ever Acadian flycatcher — a bird species that wasn’t even on my wish list! It is a rare event for me to see three life birds in one day, so it was an absolutely amazing day for me.

Eric Moore is the owner of Jay’s Bird Barn, with three locations in northern Arizona — Prescott, Sedona and Flagstaff. Eric has been an avid birder for over 50 years. If you have questions about wild birds that you would like discussed in future articles, email him at eric@jaysbirdbarn.com.