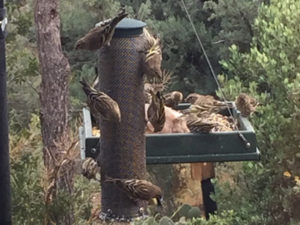 The seasonality of birds is one of the great wonders of the natural world. Bird migration is a remarkable feat when you consider the distance birds travel each year. What prompts them to leave? How do they know where to go? How do they know when they have arrived at their destination?

Many migratory species pass through Arizona in the spring on their way north, and again in the fall on their way south. There also are many examples of migratory birds that winter here. The central highlands area is apparently considered south from wherever certain birds spend their summers.

There also are species that don’t migrate at all. Many of the birds that inhabit this region are permanent, year-round residents. Examples of non-migratory birds include Gambel’s quail, crissal thrasher, mourning dove, spotted towhee, bridled and juniper titmice and bushtits.

Other bird species exist that I call “partial migrators.” The best example of this in our area is the lesser goldfinch. A portion of the population migrates and a portion stays all winter long.

Sometimes when goldfinches are absent from backyard feeders, it is not so much a function of migration, but is related to other natural events. When goldfinches are busy building nests and rearing young, it is typical for them to stop visiting seed feeders, as they switch their diet to insects during this time.

Another natural occurrence affecting goldfinches at the feeders is either the abundance, or the lack, of natural food sources available out in nature. During seasons of drought, wild birds tend to be more dependent on human-provided food sources. During times of plenty – such as this fall – where our summer rains have produced a profusion of natural food sources, wild birds can find ample food in nature, resulting in less dependence on seed feeders.

Over the past few weeks, I have noticed a big influx in pine siskins. Siskins are both a latitudinal and an elevational migrator. Siskins love nyjer (thistle) seed, which also is preferred by lesser goldfinches. Earlier this week I took a picture of both goldfinches and siskins eating together at the same finch feeder.

I recommend providing nyjer seed in the fall and winter months. Even if your goldfinches abandon you, it is very likely that pine siskins will descend on your finch feeder and provide you with plenty of entertainment while the finches are gone. Fresh, dry seed will ensure flocks of birds at your feeders just like this picture that was taken on Monday of this week.

A brief reminder: our wild bird photo contest exhibit still is open to the public here at the store on Willow Creek Road. This is a free event we host each year in conjunction with our fall seed sale and anniversary celebration. The last day to vote is Monday, Oct. 27, so hurry in!