Goldfinch numbers – are they up, or are they down? 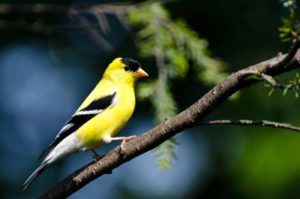 As the owner of a backyard wild bird store, I have a lot of interesting conversations with customers. A lot of these conversations range from one extreme to another. For example, one customer will comment, “I have more hummingbirds this year than I have ever had,” whereas the very next person who walks through the door will comment, “Where are all of the hummingbirds this year? We just don’t have nearly as many this year as we had last year.”

And so it goes here at the Bird Barn, day after day, week after week. It is an interesting paradox to hear multiple times throughout the day the different extremes that people share with us. How is it possible that large numbers of people in the same general area are having very different experiences at the same time?

This year, more than any other year, many of the comments and questions we are fielding have to do with goldfinch numbers. Like the hummingbird conversations, I am hearing the two extremes about goldfinches. Folks are either overrun with them, or they have very few.

As you might imagine, all of the folks who aren’t seeing as many goldfinches this year want to know why. That is a good question, and honestly, I don’t know the specific reasons why. I say “reasons” instead of “reason,” as I suppose there could be a variety of answers.

It is important to point out that it is not realistic to assume that bird numbers will be the same year after year. The population of wild birds is dynamic and fluid, not static. There are many variables that affect wild bird numbers, including conditions in their winter range, a successful migration (did they make it back), weather (specifically drought conditions), the availability of water, the abundance (or scarcity) of food, breeding success, and predators, to name a few.

This past week we received a new shipment of nyjer/thistle seed, which is the absolute favorite food of goldfinches. It will be interesting to see if finch activity at backyard bird feeders picks up as the new, fresh seed gets out into the community. I suppose that would be a possibility.

On another note, over the last week I have received a lot of questions regarding the impact on wild birds with last week’s wildfire in the Granite Mountain Wilderness Area.

As you know, the fire moved very fast the first day, consuming thousands of acres in just a matter of hours. I can only assume that a lot of baby birds were killed by the fire because of their inability to escape the approaching flames.

On the other hand, I assume many adults were able to flee harm’s way and escape death.

One thing is certain – with the loss of habitat and natural food sources, birds that once inhabited the burned areas have relocated to the surrounding, undisturbed areas resulting in increased bird activity for those living close to the fire. Customers living in the Williamson Valley area have already shared with me how the bird activity has increased in their yards.

If you live in an area near the fire, you may consider bumping up the amount of food and water you are providing, as all of the displaced birds are looking for food and sources of water.