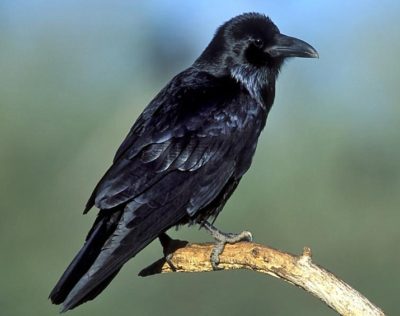 If you look at a range map, the distribution of ravens is impressive. Ravens are a year-round species as far north as the Arctic Circle and can be found as far south as the tropics of Central America—and everywhere in between.

Ravens can endure sub-zero winter conditions in Arctic regions and survive in Death Valley, too, where temperatures can be in excess of 120 degrees.

Several years ago, when I hiked to the top of Humphreys Peak in the San Francisco Mountains, guess what was the one and only bird species I saw at the summit? If you guessed the common raven, you would be correct. Not only were they at the summit, but they were having a grand time, wheeling and swooping and making full use of the wind currents there.

Each week when I drive between Prescott and Flagstaff on Highway 89 and on Interstate 40, the one species I see more than any other is the common raven. Its flight formation reminds me of a squadron of fighter jets as they patrol the highway, looking for road kill from the night before.

Ravens are also omnivorous and opportunistic. There isn’t much they won’t eat. We’ve all seen them dumpster diving behind fast food restaurants, scavenging food from grocery store parking lots or feeding off of the carcass of a dead deer or elk on the side of the road.

In breeding season, ravens become a bit pickier about the food they are looking for—not so much for themselves, but for their young. When they have babies in the nest, they are more predatory and will steal baby birds and bird eggs from the nests of songbirds.

Ravens are highly intelligent. One example of their brilliance is how they get water to their babies in the nest. Ravens utilize ponds, fountains and birdbaths as a place to soak food before taking it up to their nest to feed to their young.

In Prescott and Sedona, we get mostly ravens, whereas in Flagstaff and Payson there are both ravens and crows.

What is the difference between the two? Ravens are significantly larger, have a wedge-shaped tail, and have a deeper, more guttural vocalization. Crows are smaller, and their vocalization is higher pitched.

One interesting behavior ravens engage in is when they ‘mob’ or attack and harass birds of prey, such as red-tailed hawks and golden eagles. Of course, ravens are frequently mobbed, themselves, by songbirds, such as kingbirds. ,

One of the things I really like about ravens is their sense of play. They are masters on the wing. As you watch them on a windy day, you cannot help but feel they have a sense of playfulness as they frolic in the wind.

One of my favorite places to watch ravens is at Prescott High School. The prevailing winds in Prescott come out of the southwest, and the girl’s gym on campus is positioned in such a way that, as the wind hits the gym wall, the wind is pushed up, creating tremendous lift. Ravens fly back and forth over this area where the air is being pushed up. For ravens, flight does not seem so much to be a chore, but a delightful experience.

Eric Moore is the owner of Jay’s Bird Barn, with three locations in northern Arizona – Prescott, Sedona and Flagstaff. He has been an avid birder for more than 50 years. If you have questions about wild birds that you would like him to address in future articles, email him at eric@jaysbirdbarn.com.