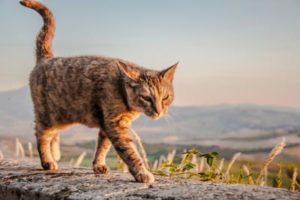 I witnessed a really sad situation this past week. I was on an evening walk in our neighborhood when I heard the peeping sounds of baby quail, along with the frantic vocalization of an adult female quail.

Looking over at the entry way of the home I was walking past, I saw a cat sitting on the sidewalk, with a baby quail here, and a baby quail there, obviously maimed and barely able to stand without falling over. I immediately walked up to the door of the home and knocked, as I didn’t know if the cat belonged to the homeowners-it didn’t.


The cat ran off, leaving in its wake several defenseless baby quail, only hours out of the egg, doomed to die because of their inability to keep up with their mother. The mother had a whole brood of babies under her wings, and others were trying with great difficulty to make their way to her.

Unfortunately, the whole situation was pretty pitiful. I doubted she would be able to shepherd her brood to safety before nightfall, and surely the cat wasn’t too far away, as I had only scared it off momentarily.

The homeowner made the comment, “That’s nature!” My reply was, “No that is not nature; cats are not native or natural.” Lest you think I am anti-cat, I am not. I like cats just as much as I like dogs and snakes and just about any other animal. However, I am adamantly opposed to pet owners allowing their cats to freely roam outside-killing lizards, bunnies, birds and who knows what else.

Cats are great-indoors. Many people complain about non-native birds such as pigeons and the mess they make. What is the difference between non-native, introduced bird species such as pigeons and non-native, introduced cats? Allowed to roam freely, both domesticated house cats and wild, feral cats, have a devastating impact on animals that are not evolutionally adapted to the presence of cats.

After talking to the homeowner, I picked up the two baby quail that were on the patio, and a third that was in some rocks just off of the porch. The mother was frantic, to say the least, as she had a large brood with perhaps as many as 15 chicks that she was trying to keep together and get to a safe place.

From what I could tell, the nest where all of the baby quail hatched out was in an elevated planter with some low-growing plants. Once the babies left the safety of the planter, they could not get back up into the planter, and had to navigate a front yard that was landscaped with decorative rock. There was no protection for them anywhere.

As mentioned previously, the chicks couldn’t have been more than a few hours old, and the exertion of trying to walk through the rock yard was taking its toll on the whole brood. I tried to place the three chicks I rescued near the mother-it was a delicate balance trying to approach her, as she was stressed by my proximity and wanted to leave all of the chicks that were huddled under her wings. I left feeling very badly for how that whole situation would likely end.

For some reason, there seems to be a double-standard in our community when it comes to dogs and cats. No one would tolerate dogs running loose, being off leash and killing wild animals, but cats are allowed to roam freely every day without any outcry. It is something to think about.