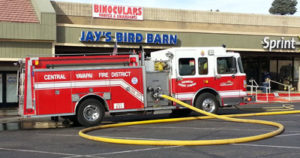 At about 9 a.m., Central Yavapai Fire Department responded to a call at the store, 1046 Willow Creek Road, regarding a fire. When the fire crew arrived at the scene, the store was filling with smoke and the sprinkler system was running. Fire fighters were forced to break a window in order to gain entry into the store.

With the fire spreading into the ceiling, out of reach of the sprinkler system, two additional fire engines from the Prescott Fire Department were called in, along with a Prescott Fire truck company, a battalion chief, and a fire investigator.

“The activated sprinkler kept the extension of the fire to a minimum, saving several adjacent businesses,” fire officials said.

According to storeowner Eric Moore, the fire started on a wall display at the front of the store. The display included women’s clothing and some glass spheres. When the sun shone through the window onto the glass spheres, the spheres acted like a magnifying glass, creating a concentrated beam of light. The beam of light caused the wall and clothing to heat up and catch fire.

“It’s a very strange story. It’s the strangest story you’re ever going to hear for cause of origin,” Moore said. “Of course we are closed on Sundays so no body was here. The sprinkler put the fire out, but it ran for a long time before anyone got it turned off.”

Despite the extensive damage to the store, Jay’s Bird Barn will be opening its doors at 8:30 a.m. Monday in an empty storefront two doors down at 113 Willow Creek Road.