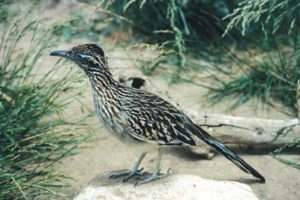 Last week I had the opportunity to lead a week-long bird watching trip in Wickenburg for a Road Scholar (formerly Elderhostel) program sponsored by Northern Arizona University. The weather was perfect – in the mid 80s each day, and it seemed as though all of the elements came together for a successful bird watching trip.

Our birding destinations were the same as in each of the six previous years I have done this trip – Date Creek, Burro Creek, Hassayampa River Preserve, Yarnell, Walnut Grove and Congress. Many of these areas are riparian habitat (streamside) with cottonwoods and willows. Where there is water in the desert, there are birds!

In the Sonoran Desert habitat, I enjoyed seeing some of the year-round bird species such as curve-billed thrasher, cactus wren, verdin and black-throated sparrow. I love being in the desert, as it reminds me of my boyhood days growing up in Tucson.

We had great success in finding and identifying a variety of bird species that people specifically come to Arizona to see. Most years on this trip we search and search for greater roadrunners and usually strike out. This year, however, we saw a pair of roadrunners on two different days. After we found the first pair, I felt so relieved – it was almost like, “Okay, now we can go home. We have found the most difficult bird of the week.” I don’t know why we have such a hard time finding roadrunners each year, but we really struggle to find them.

Each of the 19 participants was from a different part of the United States, and one was from Canada. Seeing a roadrunner was a target bird for many of our guests.

Arizona is home to several hawk species that are difficult to find outside of the state. We made a clean-sweep, seeing each of the specialty Arizona hawk species including Harris’ hawk, gray hawk, common black hawk and zone-tailed hawk. We also saw a juvenile bald eagle, a peregrine falcon, many red-tailed hawks, Cooper’s hawks and American kestrels. We really hit a home run when it came to birds of prey!

This was the first year we hit the 100 species mark for this trip. We saw several species last week that we had never seen before on previous Elderhostel trips, including black-crowned heron, lark bunting and a male yellow-headed blackbird that was downright stunning!

In spite of some spring arrivals, it was still too early for others. We only saw one oriole species, and we did not see any tanagers, grosbeaks or lazuli buntings.

While birding at the Hassayampa River Preserve (which is owned by the Nature Conservancy), we found two hummingbird nests. Finding a hummingbird nest is all about timing. You have to be in the right place at exactly the right moment to see the female hummingbird fly into the tree where her nest is located and sit down on the nest.

This past week I discovered an active Anna’s hummingbird nest in my yard. It is actively sitting on the nest, indicating she has already laid her eggs. I will try to get a picture of the nest for next week’s column.