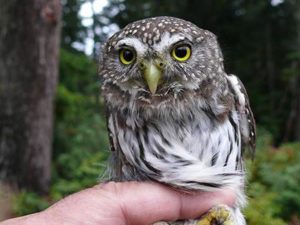 On Monday, Nov. 9, I received a phone call about a potential rare bird at Watson Lake, observed from the overlook on Highway 89. I managed (it was hard) to drop everything and race over to look at the yet-unidentified bird, hoping that perhaps it would be a new bird for my life list.

By the time I arrived, there were already three birders on the scene, and a fourth arrived before I left. It was a funny sight, several high-powered Swarovski and Vortex spotting scopes lined up in a row, focused on the bird in question. I’m sure anyone parked at the overlook was wondering, “Who are these strange people and what in the heck are they looking at?” Birders are a unique breed.

It was super windy at the overlook, but the viewing conditions were ideal. Good lighting and great optics enabled us to see crucial identifying field marks that ultimately contributed to a final decision-a ‘first winter’ ring-billed gull. It was not a new bird for my life list, unfortunately.

When it comes to identification, gulls can be tricky-even for experienced birders. It takes several years for gulls to obtain their adult plumage. Most field guides show the progression of plumage and label the illustrations accordingly-first year, second year, etc. Even in adult plumage, gulls can be challenging as their winter plumage is different than breeding plumage.

While much of our attention was focused on the gull, we also got our scopes on a prairie falcon perched on top of a wooden telephone pole on the opposite side of the highway. The Prescott area is home to four species of falcons: American kestrel, merlin, peregrine and prairie. Of the four, prairie is probably the least common, so it was a thrill to see one.

This time of year, email notifications of unusual bird sightings in the area seem to come through every few days. Some of the uncommon bird sightings reported last week include; grasshopper sparrow, evening grosbeak, red-breasted merganser, horned grebe and a northern pygmy owl.

The northern pygmy owl was a particularly good find as this is a species that is very difficult to find. The pattern for finding this owl species could best be described as stumbling upon one. Micah Reigner was leading a free Jay’s Bird Barn-sponsored bird walk at Granite Basin when they did just that-they stumbled upon one. The owl was super cooperative, allowing the entire group to get unprecedented looks for an extended period of time with binoculars and a scope. It even posed nicely for photographs!

There is a difference between field birders and what I refer to as casual backyard birders. Field birders tend to be individuals who will go to almost any length to see a rare bird, particularly if it is a ‘life’ bird. In some ways, birdwatching is very much a sport-without a way to ‘win’ as there is no way to keep score. Perhaps your score would be your life list, which is the total number of species you have seen over the course of your life.

One of the thrills of birding watching is never knowing what you might see when you head out into the field. Last Thursday I was birding down in Phoenix at Rio Salado off Central Avenue when I stumbled upon a female painted bunting! What an amazing moment it was for me as this is a species that I have never seen in Arizona before, in the fifty years I have lived here.