How fast do birds fly? 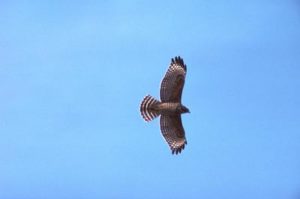 Have you ever wondered how fast birds fly?

I had a unique experience this past Sunday evening as I was driving. It was slightly after 8 p.m. when I observed a fairly large bird fly across the road, up ahead of me. It was well past sunset, which made me think – ever so briefly – that perhaps it might be either a poorwill or a whippoorwill, as that is the time of day when these birds are active.

After the bird flew across the road, it proceeded to fly parallel to the road, and I caught up with it and was driving at the same speed at which it was flying. I looked over at it and realized that it was a Cooper’s hawk. At that moment, it was flying approximately 30 miles per hour, based on my car’s speedometer.

I have had similar experiences with other species over the years in which I have attempted to clock birds in flight based on the speed I was going in my vehicle. I have done this on several occasions with Mourning Doves. They seem to be comfortable cruising anywhere between forty and fifty miles per hour, with what appears to be very little effort.

Cruising speed for most bird species is anywhere between twenty to thirty miles per hour. However, if they are being chased, or if they are doing the chasing, they can certainly fly considerably faster.

It is interesting that the size of a bird has little bearing on the speed at which it can fly. It has been documented that hummingbirds and geese can reach similar maximum speeds. I think the size of the bird influences our perception of how fast it is flying. For example, a hummingbird flying at 30 miles per hour appears to be going much faster than a raven flying 30 miles per hour.

Wing shape has the largest impact on flight speed. Most songbirds have short wings that more or less taper to a point at their outer tip. This type of wing structure allows these kinds of birds to take off rapidly, but they are not designed for flying at high speeds for sustained periods of time. Think of Gambel’s quail – they are capable of powerful flight, but only for short distances.

Bird species with large, broad wings, such as vultures, hawks and eagles, are designed for soaring, but they certainly can fly at tremendous speeds for short periods of time, particularly when they are in pursuit of prey.

When I lead bird walks, I point out the different flight patterns that are observed in the species we are seeing. Swallows, for example, have a flight pattern that is referred to as “aerial foraging,” in which they catch insects while in sustained, continuous flight. Hummingbird flight behavior is referred to as “hover and glean” as they gather nectar and insects while hovering.

Flycatchers, phoebes and kingbirds employ a foraging technique referred to as “hawking.” They sally out from a perch on short flights to capture flying insects. As you learn the different flight patterns that are unique to specific bird species, you can begin to categorize birds into families just by observing their flight behavior.