The early birder gets the worm 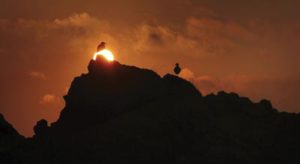 This past week I was in Atlanta, Georgia, attending a trade show. Being the hardcore birder that I am, I managed to squeeze in some birding at the Gilbert Water Ranch before flying out of Phoenix.

I started birding at 7 a.m. – long before the sun had had a chance to break over the horizon. It is still pretty dark at that time of day, but I didn’t want to waste a minute. I had a wonderful time and saw around 56 different bird species, including some uncommon birds.

Two of my better finds for the day were a black and white warbler and a white-throated sparrow. Both birds were incredibly cooperative, allowing me to have fantastic views of them at very close range. I was thrilled!

As you might imagine, after arriving in Atlanta I decided to go birding. You may recall last week was the “polar vortex,” and it was very cold in Atlanta. One morning it was only seven degrees, but I was bound and determined to go birding.

I had no idea where to go, so I used a free map from the hotel and located a city park that was several miles away. It looked promising, so I bundled up and walked to Piedmont Park. It turned out to be a great birding destination – I saw 34 species, and I even added a new species to my life list!

One of the very first birds I saw after arriving at the park was a rusty blackbird, a species I have never seen before. My day was off to a good start! I enjoyed seeing several varieties of eastern birds – such as blue jay, Carolina wren, Carolina chickadee, eastern bluebird, tufted titmouse, eastern towhee, eastern phoebe and brown thrasher.

What was particularly fascinating to me was seeing some of the same species in Atlanta that I had just seen in Arizona at Gilbert Water Ranch. Some of these species included northern mockingbird, ruby-crowned kinglet, orange-crowned warbler, song sparrow, red-winged blackbird, house finch and white-throated sparrow.

On Monday of this week, there was a bird walk at Willow Lake sponsored by Jay’s Bird Barn. When the group returned from their outing, they were all smiles and were very happy, having seen some really great birds, including a white-tailed kite and a Pacific wren. Both species are uncommon for this area, so it was nice that everyone got to see them.

A week from today, Thursday, Jan. 23, is the Prescott Audubon Society’s monthly membership meeting, which is open to the public. The speaker will be Chris Poppenberger, a Wildlife Manager with the Arizona Game and Fish Department. The program will focus on javelina – their physical characteristics, their habitat selection and distribution, behavior, reproduction, feeding behavior, management, and human/javelina conflict resolution. The meeting starts at 7 p.m. and is in the fellowship hall of Trinity Presbyterian Church at the corner of Park Avenue and Copper Basin Road in Prescott.

If you would like to participate in free guided bird walks, visit the Prescott Audubon Society website at www.prescottaudubon.org, or visit the Jay’s Bird Barn website for a listing of upcoming bird walks.

If you would like to do some birding in a warmer climate, the Red Cliffs Audubon Society in St. George, Utah will be hosting its 11th annual St. George Winter Birding Festival from Jan. 23 to the 25. Sounds tempting! Visit their website at www.redcliffsaudubon.org for more information.