Don’t mistake that pine siskin for a lesser goldfinch 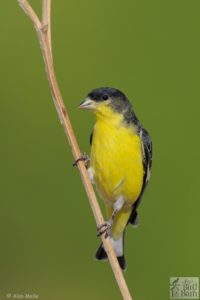 In a typical year lesser goldfinch numbers in the Prescott area dip in winter, dropping by as much as half from our spring and summer numbers. This year our goldfinches left early, and they left in record numbers.

Over the past few months, sales for finch seed have been very slow, indicating that most customers (although there are always exceptions to the rule) have had very little finch activity in their yards.

Last week nyjer/thistle seed sales really shot up. There are several possible explanations for this. One reason could be that maybe finch activity has started to increase. Another reason is that the recent round of cold weather and snow has prompted a lot of people to feed their birds.

However, there is a third possibility, and it has to do with another species, which also loves nyjer/thistle seed. Do you know what a pine siskin is? It is likely that you have recently experienced a surge in pine siskin activity at your finch feeder – whether you realize it or not.

Pine siskins are a small seed-eating bird in the same genus as lesser goldfinches. If you are not accustomed to looking at the birds at your feeder with binoculars, you may have siskins feeding at your feeders without you even knowing it. Viewed from a distance you may think that what you are seeing is just a bunch of female, or first-year lesser goldfinches. Or are they?

Siskins are similar to goldfinches in many ways, including a fondness for nyjer/thistle seed. Here are a few tips on what to look for when identifying a pine siskin: They have a sharp, pointy beak; the breast area has well defined vertical streaking; and they have a slight tinge of yellow in their wings and in their deeply forked tail.

If you are looking at them from a distance, without the aid of binoculars, you might also mistake a siskin for a female house finch. But,upon careful inspection you will see the obvious differences. House finches have a short, conical shaped beak for seed cracking, are much larger than siskins, and they do not have any yellow in their plumage.

Siskins are gregarious, feeding together in small flocks, both in nature and at seed feeders. Their vocalization is unique in the sense that it is not very musical – it is more of a raspy, buzzing sound.

As you might surmise by the name pine siskin, their preferred habitat is a coniferous forest. With the recent heavy snowfall at the higher elevations, it is likely that finding food in the forest has been very challenging for these little birds.

It is common in winter for birds to do an ‘elevational’ migration to locate available food sources. For many species, instead of flying south for the winter, migration is simply a matter of moving down to a lower elevation.

A likely explanation for increased activity at nyjer/thistle feeders is that our area has experienced an increase in pine siskins over the last two weeks, because they have been pushed down from the higher elevations by the heavy snows.

If you are seeing more activity at your finch feeder, I would encourage you to get out your binoculars and take a closer look at the birds frequenting your feeders. Chances are, in addition to lesser goldfinches you just may have a flock of pine siskins at your feeders. It is important to keep your finch feeders full even in winter as you never know what might show up.