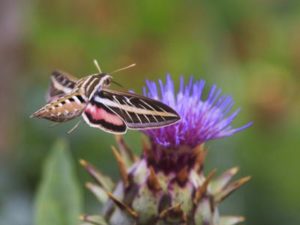 Here’s a quick update on Watson and Willow Lakes. A few weeks ago, I devoted a whole column to the topic of the lakes. Our abundant rains over the last week have produced tremendous runoff throughout the Granite Creek watershed, and Watson Lake is now filled to capacity! What a dramatic turnaround from just a few weeks ago, when it looked like Watson Lake was drying up. Willow Lake is still down a lot, but all of the rain we’ve been having can only help.

I received so much feedback from last week’s column on hummingbirds that I thought I would do a brief follow-up. If you’ve never had the experience of witnessing swarms of hummingbirds, I would encourage you visit Lynx Lake Café on Walker Road.

The café has several high-capacity hummingbird feeders on the side of the restaurant facing the lake. Lynx Lake Café is the perfect place to witness large numbers of hummingbirds coming together to feed. Go soon, though, as right now is peak season for hummingbird migration. In just a few short weeks, hummingbird numbers will begin to drop off dramatically.

On Monday of this week, a customer called to report thousands of brightly colored green and yellow caterpillars in the Pinon Oaks subdivision. They were crawling on the ground, many of them trying to cross a road, all headed in the same direction. She took several pictures of them and came by the store to share her observation with us.

Using the “Kaufman Field Guide to Insects of North America” book, I was able to quickly identify the species of caterpillar. What she saw was the larvae stage for the white-lined sphinx moth. Sometimes this species of caterpillar is referred to as a “hornworm” as it has a short posterior “horn” on the end of its body.

The adult stage of this caterpillar is a common sight in the Prescott area. White-lined sphinx moths are typically active early morning and late evening where they can be seen sipping at flowers, just as hummingbirds do! This large species of moth has fooled a lot of individuals who have mistakenly thought the moth was a baby hummingbird. White-lined sphinx months move in a similar fashion to hummingbirds, going from flower to flower and hovering for extended periods of time as they gather nectar.

I see these moths in my yard each evening as they frequent all of the different flowering plants we have, including butterfly bushes and salvia, also known as autumn sage. Every once in a while, an aggressive hummingbird will chase a sphinx moth away from flowering plants just as he would chase a rival hummingbird.

According to the Kaufman guide, the larvae are ‘remarkably varied in color pattern and they feed on a remarkably wide variety of plants. Perhaps as a result of this, the species sometimes undergoes explosive outbreaks and reaches high populations densities, especially in dry country of the west.” Well said! I suspect there will be large numbers of sphinx moths flying around the Pinon Oaks subdivision in a few weeks. Be on the lookout!