Divers vs. Dabblers – what’s the difference? 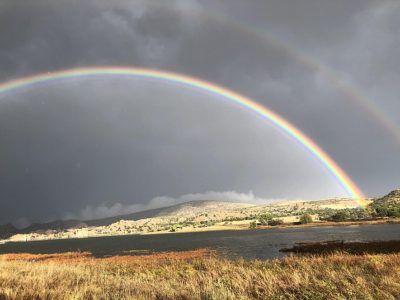 In all the years I have lived in Prescott I don’t remember an October as cool and as wet as this year. I worked at our Flagstaff store location on Tuesday of this week, and it snowed all day!

As this past Saturday’s rain storm was winding down, I donned my rain gear and headed out to Watson Lake for a hike. My timing could not have been better. As the last remnants of the storm moved from west to east, the afternoon sun illuminated the area, bathing it in brilliant light. All the while, it continued to rain lightly, creating a spectacular and brilliant double rainbow.

The bird activity at the lake is certainly picking up as we move into fall. In addition to all of the usual water birds such as mallards, gadwalls, ruddy ducks, coots and pied-billed grebes, I was delighted to see over sixty western grebes hanging out together on the east side of the lake.

It was interesting to observe how they stayed together in a loose flock and didn’t mingle with the other water birds on the lake. Many of the grebes were resting—their beaks were tucked into their feathers on their back. I assume they were using the lake as a brief stopover point before continuing their migration.

Several grebe species occur in the Prescott area—the most common being pied-billed grebes. In migration, we get quite a few eared grebes. On a rare occasion a horned grebe will show up, and we get both western and Clark’s grebes at our local lakes. You might be wondering, what is a grebe?

Grebes are similar to loons in appearance and behavior, but they are not in the same family. Grebes are water birds with a unique physical structure—their legs are set far back on their bodies making it nearly impossible for them to walk on land. However, the fact that their legs are set so far back allows them to be excellent underwater swimmers.

The foraging behavior for water birds is usually divided into two main feeding techniques: diving and dabbling. Species such as cormorants, loons, grebes and mergansers fall into the diving category. Divers—like ducks—float on the surface of the water. When they are actively hunting, however, they dive under the surface only to reappear thirty to forty-five seconds later, oftentimes more than a hundred feet from where they disappeared under the surface of the water.

When divers are underwater they are actively hunting for potential prey, which they pursue by swimming vigorously. Unlike birds of prey that also catch fish—such as bald eagles and osprey that use their talons to catch their meal—under-water diving birds like cormorants, loons and grebes use their beak to catch their food.

A number of ducks species fit into the dabbler category, including mallards, pintail, shovelers, gadwall and teal. Dabblers primarily eat aquatic plants and forage in shallow water. When they are actively feeding they tip their body into a vertical position, head down, under the water, while their rear end is sticking straight up above the surface of the water.