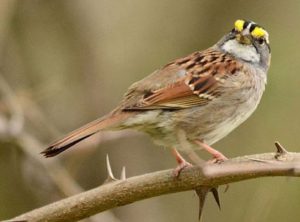 My two weeks of bird guiding for the Northern Arizona University Road Scholar program came to an end this past Friday. I kept a separate checklist for each of the two one-week sessions, and it was interesting to compare what we saw, or didn’t see, during the first session compared to the second week.

Our species count for the second week was slightly higher than the first week. I can only assume this was the case because it was later in the season, which means more migratory birds had shown up. Spring birding is exciting, as there is the possibility of new birds showing up on any given day. Here are a few examples from the last two weeks.

Week one, we did not see any ospreys. Week two, we saw three different ospreys on three different days in three different locations! The first sighting was on Tuesday at Burro Creek, the second was on Thursday at Walnut Grove and the third was on Friday, sitting on a telephone pole along Highway 89 between Wickenburg and Congress.

I don’t know of any water anywhere near where we saw the third osprey – we were in a classic Sonoran Desert habitat, so it was a notable sighting. I doubt whether it was off course so much as it was just taking a break while migrating northward.

Week one, we saw very few warblers – an orange-crowned and a yellow warbler were each observed only one time. We saw yellow-rumped warblers three out of five days, and Lucy’s warblers were observed every day. Week two, we added three warbler species to our list that we had not seen the week before – Wilson’s, black-throated gray, and common yellowthroat. We also saw orange-crowned warblers on three different days, and yellow-rumped warblers all five days.

Of course there were examples of bird species observed the first week, that we missed the second week. Week one, at Date Creek, we saw several American robins, and we had killdeer in the creek. A week later, we didn’t see a single robin and we couldn’t find killdeer either. However, we did find an American pipit in the creek during the second week, something we missed the first week.

Of course it is unrealistic to expect to see the same species week in and week out. The distribution of bird species is very dynamic. It is constantly changing. It was obvious that while there would be similarities between the two weeks, there would be differences as well, even though we ran the same trip two weeks in a row.

Further analysis of the trip reveals that there were some species that we typically see every year that we missed both weeks. For example, we did not see any cedar waxwings or pine siskins this year, which was really surprising.

However, during week two, on the day we were birding in Yarnell, we saw the best bird of the entire two weeks—a white-throated sparrow, an uncommon visitor to Arizona. In the nine years I have participated in this program, we have never seen one. It just goes to show that you never know what you will see, and that really is the whole point of going bird watching.