David and Goliath in the bird world 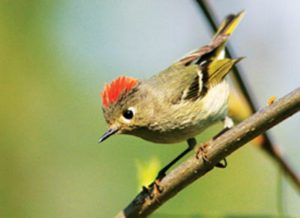 Imagine a small songbird weighing only 6.5 grams. Now picture a bird of prey weighing 150 grams. Based on the difference in size between the two different birds, one would never suspect that the smaller bird would act aggressively towards the larger bird – after all, the bird of prey is 23 times larger.

Last week, while hiking the Centennial Trail late in the day, I heard in the distance the distress calls of several different songbird species. Was there a predator in the area? I knew there was a threat to the birds and I was determined to find out why all of the birds were upset.

If the birds had not been sounding an alarm, I probably would have walked right past the bird of prey. Several bird species including American robin, hermit thrush, dark-eyed junco and ruby-crowned kinglet were very agitated, focusing their energy and attention in the area of a dead live scrub oak tree.

It didn’t take long to discover the reason for all of the commotion: A western screech owl was sitting in the opening of a natural cavity in the tree. In spite of the significant difference in size, several ruby-crowned kinglets were mobbing the owl, expressing their absolute displeasure at its presence.

How did the owl respond to the taunting and harassment? It smugly sat there pretending he couldn’t be seen. The owl didn’t blink an eye, it didn’t flinch – it sat completely motionless waiting for his challengers to go away.

Coincidentally, just this week several customers have shared with me some of their recent experiences with ruby-crowned kinglets doing battle with their own reflection in a window. When male kinglets are agitated they raise the ruby colored feathers on the crown of their head. When you see this brilliant flash of red feathers it makes identification of this species unmistakable.

Their attempts to scare off rival kinglets usually involves vocalizing and a visual display of the feathers on the crown of the head. When this doesn’t work they start flying against the window to make physical contact with the intruder in an effort to drive it off. Of course this doesn’t work either since the intruder is its own reflection!

Ruby-crowned kinglets are small insect-eating birds that rarely sit still. If you feed suet in your yard, perhaps you have seen kinglets at your feeder. They are typically seen singly this time of year but it is not uncommon for them to join small mixed flocks that contain a variety of different bird species such as titmice, nuthatches, chickadees and yellow-rumped warblers.

On a completely different note, I know the community has been following our efforts to recover from the fire we had at our Prescott store over three weeks ago. This week we were dealt another blow Tuesday night when a car drove through the front of the store in our temporary location! It is almost inconceivable that this would happen but we are taking it in stride and in spite of this new challenge we are open. I want to express to the community how grateful we are for the support we have received during this challenging time.