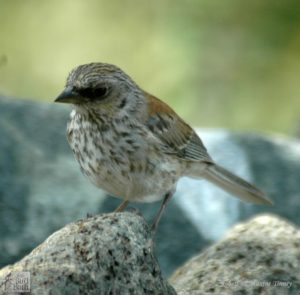 On my recent trip to Missouri, our bird walk leader was lamenting the fact that the day before our outing he had seen his first sighting of a dark-eyed junco. In fact, he used some rather strong words at his disappointment in seeing a junco. Why, you ask? Because, he said, when he sees his first junco then he knows that winter is on its way.

Dark-eyed juncos are one of the most abundant wild bird species in North America – right up there with mourning doves and house finches. In the Prescott area, dark-eyed juncos are primarily a winter visitor. In forested areas at the higher elevations, we do have one “form” of the dark-eyed junco species that is here year-round.

The topic of juncos is difficult to cover succinctly, as this species is the result of lumping together what used to be considered several different junco species. If you have been a birder for any length of time, and have an older bird book, you will remember how originally each of the different junco races was treated as a separate species.

As mentioned earlier, at the higher elevations surrounding Prescott, such as up in the Bradshaw Mountains, we have a “gray-headed” form of the dark-eyed junco that is a permanent, year-round resident that breeds here. This particular form is referred to as the “dorsalis” race in order to distinguish it from another “gray-headed” form of the dark-eyed junco, the “caniceps” race, which is a winter visitor here.

On Tuesday of this week, I happened to look out the window at my bird feeding area and lo and behold, there was one of the caniceps forms of the gray-headed form of the dark-eyed junco. Whew, that is a mouthful. For casual backyard birders this can be a very confusing topic! The bottom line is this: regardless of what “form” of junco you are seeing in your yard they are all considered to be the same species – dark-eyed junco.

There are excellent illustrations of all of the different forms of the dark-eyed junco in the Sibley Field Guide to Birds of Western North America on pages 424-426. Because of hybridization, dark-eyed juncos can occur with a variety of different plumage and coloration patterns so I encourage you to check out the pictures in Sibley.

One characteristic, which is diagnostic in all of the different junco forms, is extensive white in their outer tail feathers, which is visible when they take to flight. This field marking alone is sufficient to positively identify juncos from other small birds feeding in your yard. Juncos frequently occur in mixed flocks, so it is common to see them feeding with white-crowned sparrows and chipping sparrows.

Juncos are sparrow-sized birds and their seed of choice is white-proso millet. They are a flocking species, and in winter, it is not uncommon to see 15 to 20 juncos feeding together down on the ground below your seed feeder. Now that juncos are back, you can anticipate seeing them in your yard until April, which is when they head back to the North Country for breeding.