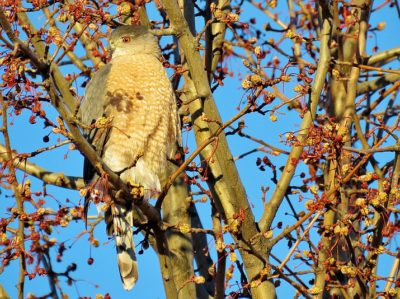 This past Sunday, as I was sitting out in my yard, I saw a Cooper’s hawk swoop into our bird-feeding area. Landing briefly in a large juniper tree, the hawk flipped around on the branch then dropped down and made a quick strike on a bird that was sitting in a tray of bird seed. Next the hawk flew up into a ponderosa pine tree.

The seed tray was blocked from my view by the trunk of the tree. However, I knew the hawk had made a successful strike when a few moments later, I saw feathers drifting down from the ponderosa pine tree.

Cooper’s hawks prey on song birds, and after a successful hunt these hawks will pluck the feathers off of their victim before eating it.

Cooper’s hawks are so stealthy, it’s almost as if they appear out of nowhere. Some birds who realize they are being hunted will freeze in place instead of fleeing. That was the case with the bird that got caught in my yard Sunday.

Staying still and in place comes with the risk of being detected, especially when the preyed-upon bird is out in the open. Surely that’s where the expression ‘sitting duck’ originated.

The other response to the sudden appearance of a predator is to flee — to fly for cover — into the nearest available vegetation. That response might be better for the preyed upon bird than staying in place, but it still leaves the bird vulnerable. On more than one occasion, I have witnessed a Cooper’s or a sharp-shinned hawk diving into a dense tree or shrub in an effort to get hiding birds to flush from the vegetation. But once the hunted bird flees, the chase is on!

Frequently, Cooper’s hawks catch birds on the wing by overtaking them in flight. Another hunting technique employed by Cooper’s hawks is to drive birds into a window, where they are either stunned or killed by the impact. ‘Catching’ the prey is then simply a matter of picking up the lifeless bird and flying away to enjoy an easy meal.

Cooper’s hawks are in a family of birds known as Accipiters. There are three types of Accipiters in North America — goshawk, Cooper’s hawk and sharp-shinned hawk. The hunting strategy for these hawks includes the element of surprise and the hawks’ speed and maneuverability.

Customers at Jay’s Bird Barn frequently ask me how to discourage Cooper’s hawks from hunting in their yard. This challenge is daunting. Hawks, just like the birds they hunt, need to eat every day. When you feed birds in your yard, you create a concentration of birds that are alluring for a hungry bird of prey.

In discussing this issue with customers, they sometimes seem to imagine that if they stop feeding birds in their yard, this issue will be resolved. While removing bird feeders may reduce or eliminate predation of birds in a yard, not feeding birds will not stop hawks from eating birds somewhere else every day.

Remember, when a hawk catches a bird in your yard, this behavior is natural and normal. Hawk species that prey on birds have been around for millennia, and their predatory behavior will continue. There is no solution to solve this so-called ‘problem,’ nor should there be. Predation is part of the balance of nature.

Oftentimes, a customer will report seeing a peregrine falcon in their yard, but it’s more likely it was Cooper’s hawk rather than a falcon.