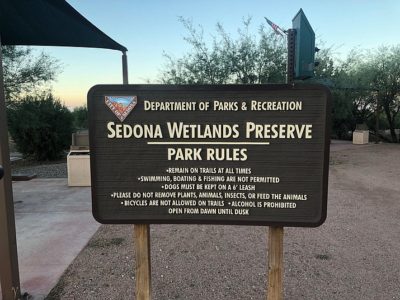 Last week I worked in Sedona for several days, and I went birding three consecutive mornings at the Sedona Wetlands Preserve. While I have been writing about fall migratory birds arriving, I hadn’t actually been out birding for a few weeks. It was fascinating to see first-hand that our fall birds are back!

I arrived at the preserve each day before sunrise and stayed for about an hour and a half. Most of my birding was at pond 1 and at the large pond in the back of the property where there is a birding observation deck. I saw a lot of the same species each of the three days but I also saw different birds each day as well.

I don’t usually go bird watching to the same location at the same time of day on consecutive days, so it was an interesting exercise to take note of what was or wasn’t there each day.

One of the more common non-water birds at the Preserve were white-crowned sparrows—a recent arrival over the last week to ten days. They will winter at the Preserve along with other migratory birds such as yellow-rumped warblers and ruby-crowned kinglets.

There were also examples of birds I didn’t see, on any of the three days. I felt I had a good chance of seeing spotted towhee, canyon towhee, rock wren or even something as common as a mourning dove. Birding is a funny sport—you don’t have a lot of control over what you see. Birds come and go, and depending upon the time of year, with breeding season over, many birds are fairly quiet making it harder to find and see them this time of year.

I bird mostly by ear—which can lead to a visual observation with binoculars to confirm identification. For example, several times I heard a bird species that I identified by its vocalization, but I still spent time pursuing the species that I might see it, too.

There were times when I heard the distinctive call notes of a ladder-backed woodpecker, or the sharp call of a blue grosbeak, or the harsh sounds of a summer tanager. It is usually much easier to hear birds than to see them, but hearing them increases the likelihood of seeing them.

For example, I could hear the call notes of Lincoln’s sparrows, song sparrows, marsh wrens and common yellowthroat in the thick cattails. I knew what I was hearing, and with some persistence I was able to see them skulking in the vegetation.

I invite you to come and vote for your favorite pictures in our tenth annual wild bird photo contest exhibit. The event is free and open to the public Monday through Saturday 8:30 a.m. to 5:30 p.m. I hope you will come see the beautiful selection of photographs submitted by our customers.