Confused by what you are seeing in your yard? 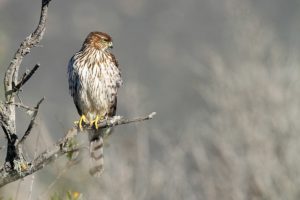 Breeding season for wild birds is still in full swing. Many bird species in the Central Highlands have two or three clutches during their nesting season. They will raise one brood to maturity and then turn right around and start all over again with a new clutch of eggs.

As juveniles fledge (leave the nest), it is not uncommon for these babies to show up at backyard bird feeders, where, in spite of their size, they beg and carry on in an attempt to get their parents to feed them. They do this even though they are just as big as their parents and are probably more than capable of feeding themselves.

Baby birds put on a really good show when it comes to begging for food. Acting helpless, they flutter their wings in a manner similar to baby birds in the nest, with their beaks gaping wide open, pleading for food and making crying sounds to illicit a response from their parents.

It is certainly entertaining to watch this exchange of behavior between the adults and juveniles. In a very short period of time—just a matter of a few weeks—baby birds go from dependence to self-reliance.

Recently in our neighborhood, we have been enjoying several juvenile Cooper’s hawks which are now out of the nest. At this stage in their development, they are very vocal, emitting a high-pitched screeching sound. This begins at about five in the morning, just as it is getting light. I will certainly be glad when they get past this phase!

It can be challenging this time of year to identify juveniles that are recently out of the nest, especially if they are not with an adult. Juvenile plumage, depending upon the species, can be very different from adult plumage. It is frequently the case that a juvenile’s plumage is similar in appearance to an adult female of its species.

This is not always the case, though. Juvenile males can be particularly challenging to identify, as their plumage is not like adult males. I receive a lot of emails this time of year from customers who send me pictures of birds in their yard because they are confused by what they are seeing.

Relying on plumage is one strategy for identifying fledglings, but here are some additional identification pointers to take into consideration when studying a bird you are unfamiliar with.

Shape and size. Once a baby bird has fledged, it is usually similar in shape and size to an adult of the same species.

Beak structure. This is a critical piece of the puzzle when identifying birds.

Behavior. Is it acting like other birds you are already familiar with in your yard? A great example is the spotted towhee. Juveniles look different from adults, but their behavior is a dead giveaway.

Habitat. Where are you seeing the bird? Have you seen other birds in this same area that are similar in size, beak structure and behavior to birds that you are familiar with?

Association. You have probably heard the expression, ‘guilt by association’. It is common for birds to hang out with other birds of their own species. When fledglings are with their parents, it is fairly easy to identify them based on who are they with and who is feeding them. This works well unless one of the babies is a cowbird.

Good luck this week identifying all of the “new” birds showing up in your yard. Until next week, Happy Birding!